It's all Labour's fault. We didn't get elected. We went into the May 2015 election with a brilliant strategy based upon an alternative energy sector that would employ 1 million workers, dramatically reduce the cost of sustainable planet friendly energy production and turn the UK into a leading centre of excellence for research and development in this field ............. but ............. we failed to get the voting public interested in it .......... scuppered by bacon sandwiches, economic credibility and the SNP; not forgetting the leaching of votes away to the Greens.

Now the Tories feel emboldened to follow their instincts and deny the need to reduce carbon emissions. One obvious sign of this is the collapse of the £1 billion scheme to build a carbon capture facility at the Drax coal fired power station : reference this Guardian article and if you want an overview of just how badly the Tories are eroding the nascent eco-friendly industry you should read this further article in the Guardian - Nine Green Policies killed off by the Tory Government or, if you want more evidence yet another article detailing the impact of Tory policies. From August 2015 renewables will no longer receive climate change levy exemption certificates, costing the industry £3.9 billion over five years. The minister responsible for all of this is  Amber Rudd who we can trust to be impartial in the way she runs her department despite this: her brother is a top financial lobbyist for energy clients. Well that's reassuring ......... but let's not get sidetracked by personalities, it does not matter who the Tories put up as energy minister, their policies will not change.


What is really upsetting is how they are able to sell all this to the voter as being a credible way forward for our country, as if the UK was somehow immune from the effects of carbon emissions. Let's not be fooled here, the UK is not entering into an energy crisis that is several levels worse than the problems that beset us in the early 1970's (the oil crisis), despite what George Osborne would have us believe. On the surface the fact don't look too good but bear in mind that since 2005 overall energy use in the UK has fallen by 18%; we are now using 5% less energy than 50 years ago. This is the sort of stuff that the big energy providers (and Osborne) try to frighten us with:

There is a high-voltage DC connection with France with 2000 MW capacity, and a 1400 MWe link over 700 km with Norway is planned. Per capita UK electricity consumption was about 5000 kWh in 2012.
In 2009, half of British gas was supplied from imports (compared with 32% in 2007), and this is expected to increase to at least 75% by 2015, as domestic reserves are depleted.
North Sea oil has been a major energy and revenue source for the UK, but the resources are now depleted and the looming decommissioning cost is about £30 billion, with the government liable for 60% of this.
(source: World Nuclear Association - UK country profile)
Did you get that last sentence -------- UK government liable for 60% of North Sea Oil decommissioning .......... that means a sum of £18 billion in the next few years. But this is peanuts in comparison with the sums we will have to pay for nuclear energy decommissioning and it is significant (though hardly a surprise) that the World Nuclear Association UK profile fails to mention that cost but we have to foot a significant bill for the 23 existing (some already being decommissioned) nuclear power plants. There are some facts and figures about this to be found on the Nuclear Decommissioning Authority website which contains this handy chart: 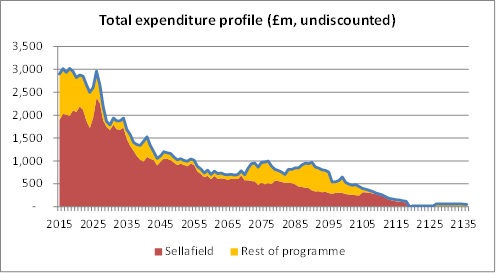 This suggests that over the next 10 years we have to pay £26 billion for nuclear decommissioning but, despite a significant tail off the bills just keep on coming for the next 100 years (and I suspect for ever after).

Thank goodness the Tories have a cunning plan 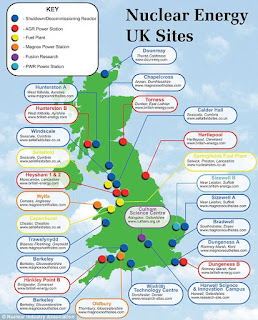 Yes of course they have a plan (it's not just fracking and subsurface gasification)......... which is .......... to build more nuclear power plants. There are 19 in the pipeline (perhaps not the best word to use) which at a current industry average build cost of £5.84 billion per plant puts the total planned investment at £111 billion ......... kerching. Obviously they have realised that this is perhaps not such a cunning plan so they are cleverly applying this wording from THE ENERGY ACT 2008:

The Energy Act 2008 stipulates that plant operators are required to submit a Funded Decommissioning Programme (FDP) before construction on a new nuclear power station is allowed to commence. The Funded Decommissioning Programme must contain detailed and costed plans for decommissioning, waste management and disposal. The government will set a fixed unit price for disposal of intermediate-level wastes and used fuel, which will include a significant risk premium and escalate with inflation. During plant operation, operators will need to set aside funds progressively into a secure and independent fund. Ownership of wastes will transfer to the government according to a schedule to be agreed as part of the FDP.
That sort of ....... seems to be ....... ok, but the implementation of this wording has allowed the Tories to enter into an agreement with EDF to pay them way above the industry standard for energy the company will provide from a new nuclear facility at Hinkley Point C, up to 2061 .......... at an estimated lifetime cost of £76 billion (that's what is behind the reported £98.50 per megawatt hour - it includes decommissioning). Surely this was not the intention of the act. It should have provided transparency of nuclear life cycle costs including decommissioning so that a fair comparison could be made with alternative sources of energy. Perhaps if I point you in the direction of one more very informed link: The Ecologist - Hinkley C's claimed benefits evaporate under scrutiny.

It cannot escape your notice that we are talking about huge amounts of money here. What about if we started to think about an alternative, what about if we took that capital cost of £111 billion for new build nuclear plants and invested it in something different, something more 21st century and not replicate the mistakes of the latter half of the 20th. Well thoughts like that were at the heart of the Labour Policy on energy. It wasn't all good as there was still a residual leaning towards nuclear but at least there was a desire to go for sustainable methods of production. Within the Labour manifesto for the 2015 election there was a section which highlighted a strategy of moving towards more locally produced energy, acknowledging these prophetic words:

"The world is clearly moving towards much more distributed electricity production and towards microgrids. The pace of that development is uncertain. That depends on political decisions, regulatory incentives, consumer preferences, technological developments. But the direction is clear."
Who said this? It was Steve Holliday, CEO of National Grid, the company that operates the power transmission networks in the UK and in the northeastern US. He says the idea of large nuclear power stations to be used for baseload power is outdated whereas George Osborne says that we need a secure supply of nuclear baseload electricity. I know who I prefer to trust.

I am in the process of writing the next blog post which explores just what is meant by the term, "microgrid" and the potential for local initiatives ........... but in the meantime a browse through the The Ecologist website should prove informative.