Sadiq Khan questions the wisdom of HS2 terminating in Euston

My experience is that though the Labour Party publically supports the HS2 project, privately there are many who have grave doubts that this scheme is the best way forward for our country. Some senior figures have gone on record with their disquiet, notably Alistair Darling who warned that money was being diverted from the traditional railway network to fund the HS2 whilst Ed Balls (remember him) made it known in 2014 that Labour could not support the HS2 project if the cost estimates exceeded £50 billion. Last September, behind the scenes at the Labour Party conference in Brighton I had the opportunity to question a handful of front benchers (OK I admit it ....... only 3 of them) and they all were, shall we say, luke warm. Now we have Sadiq Khan questioning the planned 10 years of disruption that will be caused if HS2 terminates in Euston; not just for long distance travellers and commuters but also for those who live and work in that area of London. Sadiq is suggesting that terminating HS2 at Old Oak Common may be a better way forward. I am reminded of the furore surrounding the building of the railway into Euston in the 1830's, significantly featured by Charles Dickens in his book, "Dombey and Son".  See here:


For blog readers who are unsure of the railway geography of London this map of the Old Oak Common area might be of some help: 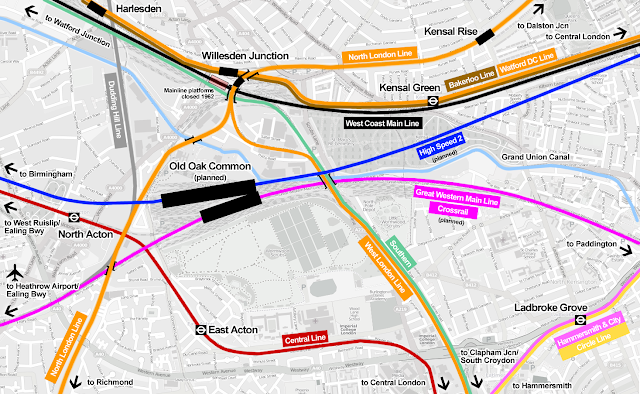 The new London Mayor has wasted no time in listening to his transport advisors; Transport for London are very keen on the travel opportunities made possible by the planned Old Oak Common interchange station between HS2 (the blue line in the above map) and Crossrail (the mauve line - well it looks mauve to me). The idea to terminate HS2 at Old Oak Common is a natural progression of this idea. Why spend all that money and subject travellers and London residents to a decade of upheaval just for passengers to be debouched at Euston, which is not as well connected to the West End and the City as a Crossrail connected Old Oak Common.

Look again at that map and you see the West Coast Main Line (the black line) just above Old Oak. This is the existing 4 track main line running into Euston that supporters of HS2 claim is incapable of handling any more passenger growth, the predominant argument justifying the building of the high speed route to Birmingham and beyond. Those 4 tracks are split between 2 that carry Virgin InterCity express trains whilst the other 2 tracks carry suburban commuter trains that reach out as far as Milton Keynes and Northampton (some trains even as far as Birmingham) ............. the London Midland franchise. The distance between the Crossrail and West Coast routes is under a mile and there already exists a railway alignment between the two (the green line on the map) and it would be very simple to link the suburban West Coast pair of tracks through to Crossrail. Construction work would be minimal, the investment comparatively little, a mere fraction of whatever HS2 ends up costing.

In this way suburban trains that now run into Euston would be diverted onto Crossrail thus providing a direct link to the West End and the City, relieving a lot of pressure from the underground and bus services. Capacity on Crossrail would not be an issue because many trains from the East End of London are scheduled to terminate at Paddington so extending them through to the West Coast via this new link would not cause untoward congestion on the section between Paddington and Old Oak.

What is the relevance of this to HS2

By diverting the bulk of suburban services out of Euston there would be no need for wholesale rebuilding of the station. You would also increase capacity on the existing Euston to Birmingham route as the main constraint is the bottleneck of the approach trackwork just outside the station .......... trains leaving get in the way of trains arriving as they fan out into the various platforms. There would also be more platforms available to InterCity trains, platforms that formerly were occupied by suburban trains.

With this increase of capacity at Euston, coupled with train lengthening (a simple matter of adding coaches to existing trains and adding some metres to selected platforms at key stations such as Watford, Milton Keynes, Coventry, Birmingham and Wolverhampton the central raison d'être for HS2 collapses.

Of course the proponents of HS2 cite other reasons why this high speed line should be built but there is now a considerable body of evidence that questions the logic of such a venture. It is a fact that no meaningful study has been undertaken to compare HS2 with alternative proposals so once again I urge that the Labour Party should push for a thoroughgoing investigation into the future of transport in this country. A royal commision would seem to be appropriate but, failing that, Labour should carry out a "Socialist Audit" on who will be the beneficiaries of HS2. The outcome would I believe show that over 90% of existing rail passengers would gain no benefit from HS2 and that there is little relevance to the travel needs of the vast majority of the population.

Sadiq Khan questions the last few miles of HS2 striking into the heart of London and it is not too late for other senior Labour Party figures to question other aspects of this elitist railway scheme.

I have written about the HS2 project before and have no wish to repeat my position so here are the links to the relevant previous posts where I explore other HS2 related themes:

London Connections - A vision and a challenge for Crossrail A very interesting paper.
Posted by It's ok to listen to the grey voice at 11:02