Sunday was an amazing day here in Liverpool, the sun was shining, the Mersey sparkled and the delegates and visitors were still full of hope at the start of the conference. I have to admit that I nearly fell asleep in the opening hours in the main conference hall but how lucky I was in my choice of lunchtime fringe event.

This was an event organised jointly by the Daily Mirror and Unite the Union with a range of very interesting speakers chaired by the well known Associate Editor of the paper, Kevin Maguire. The speakers included:

Dave Johns (the lead actor in I, Daniel Blake) who spoke about his experiences making the film with Ken Loach. Apparently Ken's directorial advice to the actors was that they should listen to each other - - something that we must be doing in the Labour Party. 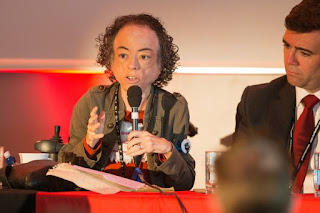 Liz Carr, the actress (you may know her from her work in Silent Witness) and she gave a most impassioned speech about the evil of the Tories and their "tax" on the disabled and the awfulness of the disability assessments. She is a brilliant speaker who should be heard by a wider audience -------- so here it is, an embedded video in this Daily Mirror article:

You will notice Andy Burnham sitting beside Liz and being given the unenviable task of following her speech. I was willing him to do well because he lost a lot of support when he ran for leadership in 2015 and opened his campaign with an austerity-light speech. I was thinking of voting for him as I thought he was the best bet to unite left-right-centre of the party but there was no way that I and many others could endorse any Labour policy that advocated that the deficit should be contained by taking money away from the impoverished. Admittedly by the end of that campaign he had changed his position but by then it was too late. That said I could see that Andy was a force for inclusivity in the party and a person who could appeal to the ........... I am sorry for this but this is the accepted language ......... the broad church that is the Labour Party and those who vote for it. He did not disappoint me on Sunday with a speech that was strong on regional opportunities .......... not surprising given that he is our candidate for devolved Mayor of Manchester. He cemented his rehabilitation in my heart when he stated that under his leadership Labour would bring back all social services into municipal control, in effect reversing the privatisation that has so bedevilled the care of our elderly, vulnerable adults and special needs youngsters. This is what Manchester needs and let's hope the example of Manchester catches fire in the rest of the country.

Andy went on talk about the folly of Teresa May and her faffing around with the fate of EU citizens who live and work in the UK. Andy said that she should have granted them an assured right of residency on day one of her sojourn as Prime Minister. He is right. At a later meeting on Tuesday evening I leant that there are 191,000 non-British EU citizens employed in the social care system. Without them our care services would collapse. Come on Mrs May get real and show some backbone before you earn the soubriquet of Teresa May Not .......... ooops .......... too late.

All the other speakers were impressive and there was a genuine warmth in the room. This was a Unite the Union event and that was the atmosphere in the room ........... United.
Posted by It's ok to listen to the grey voice at 10:24