The BBC were given access to an accident & emergency unit (A&E) last week and this is their report: The Royal Blackburn Hospital A&E - February 2017 Please take the time to click on that link if you receive this blog by post, otherwise click on the video screen below:

This is a shocking report. Patients on the unit for over 13 hours, some waiting half a day to be even looked at as staff try heroically to deliver a professional service to their patients against impossible odds. The NHS is underfunded and under-staffed; a casualty of a callous government that puts dogma ahead of patient care. The minister in charge famously stated:


In any other walk of life a failure of this magnitude would warrant a falling on the sword; at least a reshuffle to a less important post where he could do no harm but Jeremy Hunt survives despite presiding over a health service that is getting steadily worse. The reason why he remains is not difficult to understand if we accept the following from Noam Chomsky: 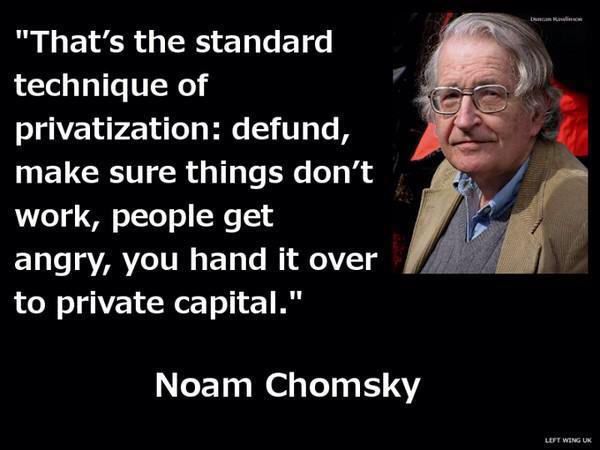 I suspect that it's not just those of us with a leaning to the left of politics that find truth in Noam Chomsky's words. I am sure that many on the right also know the truth of it but choose to give credence to the false charges that illnesses and disabilities are often the result of lifestyle choices therefore self inflicted ............... thus worthy of lesser compassion. Only a shrivelled heart would allow such judgements to be made.

There is much that angers me at the moment but the performance of Jeremy Hunt fills my head with expletives. You know, a rage at which your brain fails to put thoughts into a pattern that could, given a ghost of wind and a modicum of muscle co-ordination develop into recognisable speech (forgive me ...... I'm just trying to say that this leaves me speechless). All I can do is post the following:

Right now the budget deficit for the NHS in Derbyshire is £355 million pounds (probably well over £400 million by the end of the financial year). Every day voices from my radio talk of increasing problems getting a GP appointment, operations and treatments delayed and deferred, theatre staff standing idly by as bean counters cap the number of operations in a desperate attempt to keep within the impossible efficiency targets set by the government.

The cost of private health care

Oh yes the vultures are circling as the private health companies fight over the prone but not quite a carcass body of the NHS ................ but don't be fooled by their promises. Private health insurance is very expensive. I checked it out and was quoted £1,800 a year for a pensioner in their sixties ......... basic GP cover  (nearest 8 miles away) and theoretical unlimited treatment except for some problems which have a cap of 3 times within one year ............. oh and not forgetting if there is a flair-up of a pre-existing condition within the first 2 years of the policy then that treatment will become an extra. Of course the cost of prescriptions is on top of this so if we went for a private system to replace the NHS with it's collective tax based funding then the eventual cost could be well over £2,000 a year (£40 a week) which is in line with current NHS expenditure per capita in England but this after a shift from a progressive tax based system to a regressive private insurance regime. This, put simply, would be in line with the general trend to shift taxation from the rich to the poor. I know this may seem emotive but this is the inevitable result of privatisation or, as it is being played out in the shift of funding for social care, from income related tax (where the well-off pay more) to a basic levy on individual households via the council tax with no reference to income levels ............. the millionaire pays the same as those just above the benefits threshold .......... but even benefit recipients have to pay minimum 10% of council tax (thank you Osborne).

This could become a difficulty for EU citizens (not born in the UK) following Brexit. Changed legislation enacted in 2015 which limits EU citizens access to NHS services. This is of major concern and has the potential to penalise many who now have NHS right of access. That £2,000 sum mentioned above could be a real possibility for many hundreds of thousands who have been paying into the system for many years but because they do not possess a British passport will be deemed ineligible.

Email ThisBlogThis!Share to TwitterShare to FacebookShare to Pinterest
Labels: National politics, Numbers behind the news