A hundred years ago, November 1917 marked the end of the Battle of Passchendaele. It took place on the Western Front, over a span of 5 months near the Belgian city of Ypres in West Flanders. Hundreds of thousands sheltered in trenches made intolerable by incessant rain; wave after wave sent across the quagmire of no-mans' land to their deaths. The final tally will never be known but estimates put the death toll at 325,000 Allied and 260,000 German soldiers. 42,000 bodies have never been recovered. By the end of November the toll had reached 600,000. It is really difficult to comprehend the scale of such slaughter and the breathtaking callousness of the Allied Command who justified the battle by the belief that the German Empire would be hardest hit by such losses. The chronology and statistics of the battle are horrific as outlined here: 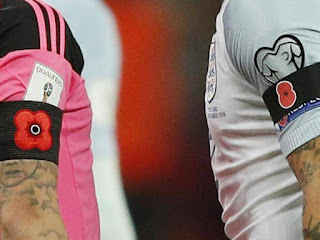 A hundred years later and a group of Englishmen competed with a similar group of Germans, this time on the well manicured turf of Wembley Stadium in London. Yes it was a football match but the sport was incidental to the emotional sight of the two nations standing together through a minutes silence, both teams wearing armbands embroidered with poppies, the symbol of loss in war.

For many, like me, this was a significant moment following months of argument with football's ruling international body who maintained that the poppy was a political statement. Finally good sense prevailed the remembrance of those who fell in conflict is allowed on the football pitch. We will never know the full extent of our loss as numbers have never been agreed ............ this Wikipedia article makes grim reading but from whatever nation they came from, all are remembered.

The leaders of government and the armed forces who sent so many to their deaths were fools. WW1 was so shocking that it was dubbed the war to end all wars yet the lesson learned was soon forgotten with 260 major wars since 1918. Still it continues. Lions led by donkeys.

And what of the current drove of donkeys? They fan the flames of war and then turn their backs on those displaced by their "strategic thinking". The UK has a vested interest in conflict as it is the second biggest exporter of military hardware in the world, second only to the USA ......... based on a 10 year average - 2016 Parliamentary report on UK arms industry. There are 170,000 UK jobs involved in the production of arms. It is no co-incidence that Liam Fox, long associated with international arms sales, has been chosen to lead the team given the task of securing trade deals with the rest of the world following Brexit, (Britain's trade policy is just the sound of one hand clapping). The British response to the resultant refugee crisis is disgusting (see here previous BelperStuff posts regarding the plight of refugees). Weaponry enables war. Without the four and a half million shells fired at Passchendaele the battle could not have been fought. Is it wrong to imagine that a concerted effort by society to turn swords into ploughshares is the best way to go? We have much more to gain by solving the evils of worldwide poverty and disease or the climate challenge and substitution of renewable for carbon based energy. The preoccupation with war and armaments must stop as this Mozambique soldier testifies here is the link:

Liam Fox is but one of the donkeys that sit around the cabinet table in Downing Street squabbling for position, arguing for a variety of Bexit flavours that nobody has voted for (Theresa May talking nonsense). 100 years after Passchendaele Europe is a united political entity except for a Britain that is intent on returning to a single nation status that will involve a deterioration in the standard of living of citizens, and a destabilising of international accord on the environment and the rights of individuals. It is only the rich who will benefit ......... because they always do. Our donkeys pursue increased international arms trade as a substitute for what is lost when we leave the EU; donkeys following the carrots dangled by financiers when they should be driven with sticks wielded by a well-informed electorate.

The Woods of Darney

Thinking of the lost 42,000 who slumber beneath the fields of Flanders reminds me of this song from Richard Thompson: For those who need the link. So many lives were lost as European society moved slowly but inexorably towards social democracy and the welfare state. Bloodshed can never be justified but what is embodied in the EU was hard won. There is a tide in history towards order and justice that cannot be halted though war, conflict and subjugation is so often employed by those who resist. The Woods of Darney are far to the south of Flanders but the two places are linked by the same struggle, muddy trenches and sacrifice.