Stepping into the newsagent on King Street this week my eye was caught by local newspaper headlines where a Tory Councillor was accusing Labour of planning to ruin Ripley's town centre by selling off a car park and of hatching this evil plan in secret. I immediately thought of Mandy Rice Davies and her famous quote, "He would, wouldn't he". (For the more youthful of those reading this blog I suggest this link: Mandy Rice Davies ) As we run into the election we can expect more of such mischief from the Tories. I personally don't like such negative tactics but as this has been deemed so vitally important by the Belper News I think it fair to respond to these Tory claims. So here goes:

When the Tories were in control of Amber Valley Borough Council they spent £1,600,000 on purchasing land on which they proposed building a new leisure centre. The plans which are still available on the AVBC website (try this link: AVBC press release from 2011 ) would have meant a drastic reduction in the size of the Field Lane car park, probably losing over 90 spaces. We should not forget that the Tories had already lost half of the Green Lane car park capacity so under the Tories the number of car park spaces that directly serve King Street shops would have been reduced from 400 to 200. Yet another example of Tory hypocrisy. If you follow the link that I have provided you will find further links to the plans that show in detail the adverse effect on parking spaces. 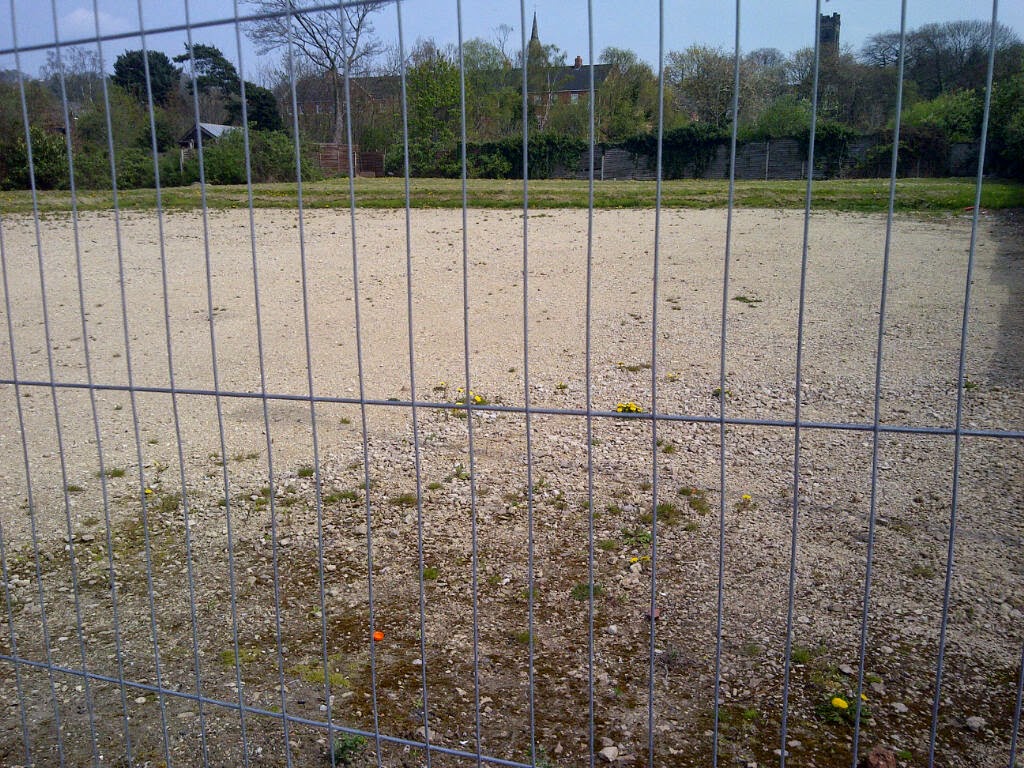 Whilst we are looking at the Field Lane purchase I cannot resist sharing with you this amazing interview with the BBC in 2011 where a leading Tory Councillor states that the council did not have the money to complete the new leisure centre project but thought it a good idea to rush ahead with the acquisition so as to "avoid VAT"  ( the link to Tory Councillor BBC interview).
I am particularly amused , if that is the right word, by this gentleman's comment that, "Our next step will be to establish funding opportunities to build the facility itself, and then to meet the future leisure needs of the people of Belper and surrounding areas.".
I took this photograph on Friday; this is how far the Tory plan has progressed in the last 4 years; a fenced off bit of ground that cost tax payers £1.6 million, an expenditure made in a town that already had a leisure centre that was in urgent need of investment. Why didn't they spend the money on our existing facilities?

But what about the accusation of secrecy?

This has to be the most scurrilous example of negative election tactics as I think back to last year and the "New Council Offices for Belper Shock" headline that never made it into the Belper News or onto the BBC News. Yes, local Belper Tories met in secret for several months on a plan to spend the Town Council reserves on the purchase of new premises to house it's three part time office staff. We will never know how much this would have cost nor how much was actually spent in time, energy and legal advice as none of these details were ever made public. It is obvious that the plan was yet another Tory folly as when it was voted upon by the full Belper Town Council it was rejected. However, that vote was held in secret, the euphemism being that the vote was held in camera. None of this was reported in any media but if the Tories can gain column inches and airtime for such blatant propaganda just before an election their own track record and obvious hypocrisy should also be a matter for public scrutiny.

So why is Labour thinking about selling off the Ripley car park?

This interests me so after a little bit of research I came up with what I think must be the reason. Between 2009 and 2014 the budget of Amber Valley Council has been cut by 42%. I found this out here: Annual Financial Statement 2014. We still await the statement for 2015 but we have already been warned that the budget for last year was yet again hit by Tory cuts, losing another £960,000. The forecast for 2015/16 being a further £1 million pounds. Faced with such huge cuts on a budget currently somewhere around £12 million is it any wonder that the borough council is looking for ways of avoiding cuts to essential services.

The comparison between Labour and Conservative financial wisdom could not be more clear. Labour tries to raise money to safeguard the fabric of our society whilst Tories squander our taxes on farcical projects that are not needed and have no hope of ever being completed.