It is the last day of August, the month that newspapers dub "the silly season" because not much happens that is newsworthy so stories that would normally be spiked as being just too frivolous will be elevated because of the dearth of real news. In the past couple of years news editors have come to realise that their burden can be lightened if they look towards Belper for a vacuous column filler. They've not forgotten the defenestration of Madam Mayor in 2013 (ok so she wasn't actually thrown out of the council chamber window but the word is used here metaphorically) and to their obvious delight, the same Tories who acted in such an amateurish fashion and without due regard for the rules governing local councils have once again provided a story that demonstrates a lack of common sense. I am obviously refering to the ongoing saga of Mr Potato Head: 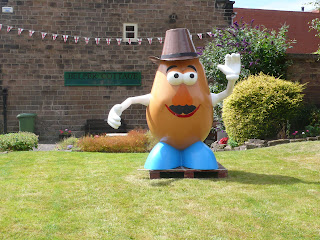 A fulsome article in the Daily Mirror

As those of you who venture along Chapel Street are no doubt aware Mr Potato Head now resides on the Cottage Project lawn facing the bus station. The leader of the Tory Belper Town Council commented:

Mr Nelson said it would stay there permanently unless needed for special events.
"He wasn't meant to be on the bus station," he said.
"It was an idea we had to put him up there so he wouldn't get vandalised.
"[But] if he was up there and the wind got hold of him... so risk assessment said no, it's not the place to be."
That's not quite what he said in a council meeting where he spoke of how wonderful it would be if motorists could look up at the bus station to see Mr Potato Head waving at them. They would have the chance to wave back at him. I have our BTC correspondent's notes of that meeting in front of me and he has tacked on his own, on the spot risk assessment of this idea as being, "unworkable, unsafe and a ridiculous waste of public funds". If the BelperStuff reporter could instantly make that judgement why has it taken Belper Town Council over 3 months to realise that the Mr Potato Head on the bus station idea was a non-starter.

It's about time that this town council started to move out of the silly season, which in Belper seems to occupy 12 months of the year and not just August. Council meetings resume on Tuesday 8th September (BTC website page with meeting dates) and we can but hope that this latest round of media interest into the unreality that is Belper Town Council will nudge some of the more aware councillors into the world that the rest of us inhabit.

There are real issues that need to be dealt with by this council; problems and opportunities that have an impact on peoples lives of far more relevance than buses on King Street, floral displays, high street honours, food festival commercial debacles or fibreglass cartoon characters being paraded as ambassadors of the town.

BelperStuff will report on these issues and hopes that the town council will not invent yet more silly season news items to deflect us from what is really important. In the meantime, if you feel the need to know more about Mr Potato Head then typing, "Mr Potato Head" into the "search this blog" box at the right hand side of the page will give you a list of all relevant BelperStuff posts.
Posted by It's ok to listen to the grey voice at 11:14