Before I get stuck into this post I have to admit that I was an HS2 sceptic from the moment I heard about the scheme. I didn't pay much attention to the emerging debate in the mid noughties because I honestly felt that this was a scheme that was somewhat before its time, something that would perhaps emerge later in the century. It was therefore a real surprise when HS2 was first adopted by the Labour Government and then enthusiastically retained by the ConDem mob and now the Tories. I was also surprised by the enthusiasm of many of my railway colleagues .............................colleagues whose judgement I would normally trust. Why was I so out of step? Why was it that my instinctive reaction was that the HS2 was not the right way to go?

I realised why HS2 was attractive to railway people; they loved the leap in technology and thought of HS2 as the next logical step. I too could feel the pull of the future, the excitement of speed and the idea of minutes separating cities rather than hours. My problem was that I could not believe that there was an ever increasing number of Brummies and Mancunians, Notts/Derbyshire & Yorkshire folk who would wish to journey to London. The evidence for such an idea was just not there; in fact an independent study made in 2007 showed the opposite: 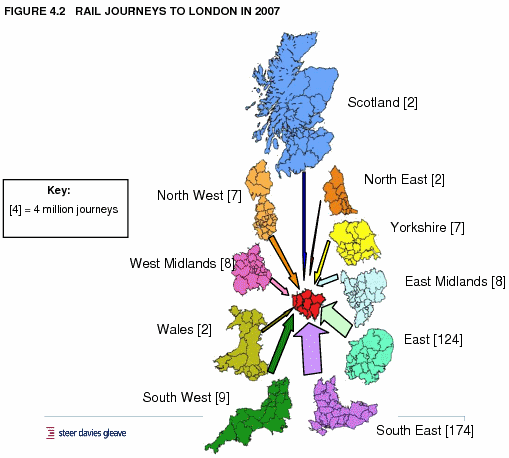 Looking at this we can see that 87% of journeys to London emanated from the Southeast and East Anglia plus the home counties with less than 10% of London travellers coming from the combined totals of the East/West Midlands and the North East/West. Given this information and the fact that over 50% of journeys were being made via a clapped out 3rd rail network south of the Thames that should have been modernised decades ago what do you think would have been the appropriate response? Should it have been "let's spend billions on 10% of the travellers"?

This was at the heart of my HS2 scepticism, that it did not address the real problems that Britain was facing. I think that the idea of HS2 gained ground because of the obvious success of the HS1 (well not economically but no complaints here), the sexy link to Paris and Brussels, sliding into the newly modernised St.Pancras with its Champagne bar, statues and wonderful Paxton roof. HS2 was sold on the back of this and for the first few years was even vaunted as a through route between Manchester and Paris, Newcastle and Cologne ......... something it would never be. What developed was a succession of reasons why we needed the HS2 ................ speed, capacity, regional growth, bangs for your buck (return on the investment) .......... now it's training ................ oh and I forgot ......... a brilliant way to travel between Leeds and Manchester (via Birmingham). All these reasons have been wheeled out to justify the investment of £21billion .......... then £32b ........ then £42b ....... oh and the cap of £50b placed on it by the Labour Party. There are some estimates that it will end up costing £90b but, in reality nobody knows. With this level of uncertainty you have to make sure that the decision to build or not to build is based upon demonstrably accurate data, indisputable facts vetted and vouchsafed by an independent body that is not connected with the decision making body. 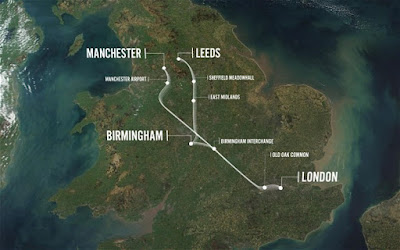 Unfortunately the debate has degenerated into interest groups arguing the toss, point and counterpoint, insult against insult ............. there has to be a better way. Why not try the following:

That last point has been hotly debated by the fore and agins but once again I look back at a study made at the outset of the HS2 story, Transport Capacity Research Paper - A comparison of the costs of different methods of increasing capacity in road & rail environments produced by the Invensys Rail Group in 2007 ............. and I quote from the executive summary:

Transport Capacity Research Paper key findings from the analysis are as follows:

I have to ask myself why successive Secretaries of Transport have not been informed that this document exists. Time and time again key studies have been ignored and I have no doubt that the latest growth figures for rail use will be touted as proof of the need for HS2 (4.7% increase first quarter 2014 to first quarter 2015) when a breakdown shows that the key driver is the growth of 6.5% in the Southeast, the rest of the country chipping in with regional operators showing 2.4% growth whilst long distance services (that would be the target for HS2) achieving 2.1% growth. On that evidence I would pump my money into the Southeast and commuter services in our major conurbations. It's cheap reliable local trains that are required.

There is a place for high speed railways

I am not in principle opposed to high speed railways. Because of my involvement with their use on mainland Europe for both passenger and freight services I can see where they are of great benefit. My experience of operating and planning trains running on high speed lines in Switzerland, Germany, Belgium, France and latterly the HS1 in the UK has enabled me to understand how best they can improve a railway network but also how they have a tendency to polarise what is on offer to the travelling public. Yes there are winner and losers ............. the loss of interregional services in Germany and France, the imposition of rigid timekeeping in Switzerland so that timeslots on high speed lines would be adhered to and the many towns across Europe that lost frequent InterCity services, demoted to feeders into the high speed railheads. For all that, it is obvious that high speed trains have been, on balance, of great benefit in Germany, Italy and France if you are travelling over a considerable distance, where the high speed rail element comprises the bulk of your journey ............. basically an alternative to flying.

I do not want to become embroiled in the endless mud-slinging between the pro and anti camps. What I would like to see is an independent commission made up of experts in a wide variety of relevant disciplines, evaluating the present and future passenger flows, a study that includes a search for cost alternatives, both social and economic. I suspect that the weight of evidence will point to a need for improved rail services but services that are much more localised. We need them now, not in 10 or 18 years time. That should be our prime objective.
Posted by It's ok to listen to the grey voice at 17:42