After managing to win an election following 5 years of ripping off the poor to enrich the already wealthy George Gideon Oliver Osborne was approached by a publisher with a book deal that he just could not refuse. They asked him:

"How have you managed to get people to vote for you when you've been systematically emptying their wallets, making a really bad fist of the economy and ruining the lives of young and old alike?"

"It's simple",  Osborne replied, and then proceeded to write this political tome, the fruit of his summer hols spent touring in his campervan.

"My daughter's choice last year, the Peak District in Derbyshire, was so relaxing so we went one better in 2015, the Speke District in Liverpool. There was plenty of time in the evenings to knock off a few chapters after enjoying the bonhomie of the communal campfire, a centerpiece of the themed campsite ....... this year a very realistic recreation of the colourful refugee camp in Calais" ........... he mused.

So ........ onto the book. The first chapter contains the meat of the book ........... well that's what your reviewer thought as he never got started on chapter 2, the will to live thankfully kicking in before the awfulness of Osborne's worldview could do irreparable damage. Chapter 1, Smoke & Mirrors said it all. Osborne has found that the gullible Tory voter will cheer him to the rafters as long as he says the right things. They don't look at what he is doing, preferring instead to be comforted by his words. This man can truly do no wrong as is evident in that loose assemblage of sheets of paper that goes by the name of The Sun:

BRITAIN’S struggling workers were saved from a £1,300-a-year income hit yesterday as George Osborne pulled a U-turn on his tax credit cuts.

Yes good old George, he has saved those struggling British workers from .......... what he threatened to do to them up to last Wednesday lunchtime. But has he really? Are struggling British workers safe from the tax credit cutting scourge that was dreamt up by Osborne, probably whilst relaxing with a warm can of Vimto as he enjoyed the balmy evening air;  the sunset burnishing the refinery smokestacks on the opposite bank of the Mersey from the Speke campsite, the grim chimneys becoming thought provoking symbols of what Britain might become if he should decide to call a halt to the alternative energy industry and turn back to fossil fuels (but that's the subject of another chapter). So did he save those struggling workers?

Once again we are indebted to the Institute of Fiscal Studies for blowing away the smoke and leading us gently by the hand from Osborne's hall of mirrors IFS Autumn Tax credit update.

See how closely the effect of the so called u-turn of tax credit cuts have hardly changed anything because tax credits will gradually wither and die as recipients are moved across to Universal Credits. This is what has been cooked up between the DWP and the treasury, ODS and Osborne. A look back at the BelperStuff post following Osborne's Summer statement - Let no man steal your thyme  shows that not a lot has changed: 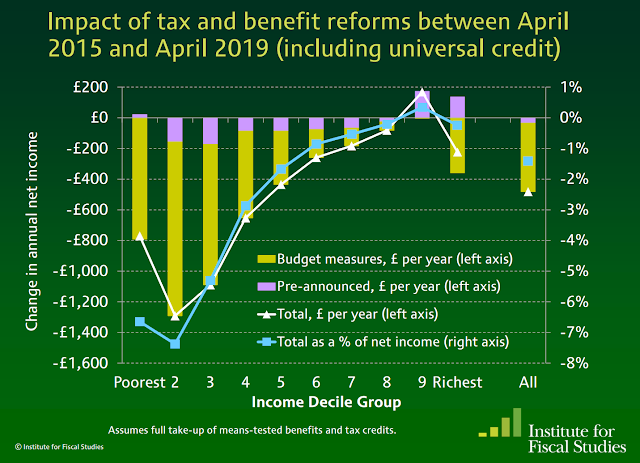 It is obvious that the debate has not ended with the Lord's rejection of tax credit cuts despite pressure groups applauding themselves for doing such a good job. For those of a more cynical persuasion (BelperStuff), you can never trust a Tory, especially the crowd now inhabiting Westminster. The fight has only just begun.

Forgive me but the words of this song fit so well:

Email ThisBlogThis!Share to TwitterShare to FacebookShare to Pinterest
Labels: National politics, Numbers behind the news