Brexit reminds me of the Nantucket Sleigh Ride

Four months on from the EU referendum and still no sight of a plan. The warnings of dire consequences following a Leave vote are materialising even before the process of negotiating an exit gets underway next March. I am losing track of the state of the pound but it is getting dangerously close to losing 20% of its value which in turn means higher prices in the shops (Unilever looking to raise prices for its products by 10%) and inflation is tipped to go from the post referendum level of 0.6% to over 2.5% sometime next year. Meanwhile the UK FTSE index goes from strength to strength so the folks with capital make money whilst those of more modest means have to pay the price. We witnessed similar distortions following the "credit crunch" with subsequent household earnings of the better off going up whilst the less well off have suffered severe cuts to their income.
Seismic economic and now with Brexit, political changes do seem to offer significant opportunities for the wealthy to become wealthier whilst the ranks of the impoverished increase in numbers following each shock to society. 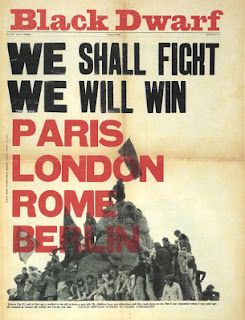 I cannot escape the feeling that the desire for revolution now resides within the very soul of capitalism because ............ well along with chaos comes the chance to make a lot of money. For years the establishment have warned against the revolutionary forces of the left, how they were committed to the overthrow of the state and the destruction of civilised life as we know it therefore a vote for conservative policies was the safest and surest way to preserve that which was worth preserving. Those of us who have ever been involved with the so-called revolutionary left were never fooled by this
rhetoric because we remember looking around at our beret wearing comrades, miserably fixated on making a half pint last through an International Socialists (IS - later to become the SWP) meeting in a dingy pub back room. It was painfully obvious that these good folk would never become the standard bearers of a new world order.

It was the late sixties, the bloom of flower power inevitably withered at the end of one brief summer, Students in revolt in Berlin and Paris; a raging battle between the police and anti-Vietnam war demonstrators in Grosvenor Square in London. A prominent Tory MP touring the country preaching his bile of hate against non-whites settling in our community whilst Russian tanks rolled into Czechoslovakia, crushing the tender shoots of the Prague Spring. History was in the making all around us but we IS members could only contribute to the cause by standing on street corners on a Saturday morning selling copies of Black Dwarf which contained the thoughts of Tariq Ali; but it was doubtful if those that were sold were ever read. 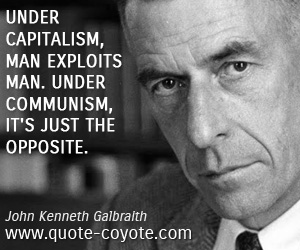 Disillusioned, I started to listen to other voices, broadening my reading then chanced upon a talk being given by J.K.Galbraith who had been part of the President Kennedy administration. Galbraith was a gangling height of a man who draped his angular body around the lectern, his essentially monotone voice gaining much needed modulation from an infrequently raised long and bony finger ........... but the delivery was of no matter because he held his audience with his words. I can still hear that voice in my head, "Revolution brings the most harm to those it purports to set free". I of course paraphrase but he went on to say that the best hope for society was an evolutionary democracy that held the wellbeing of its citizens as a core objective. Strangely enough, a few weeks later I heard Harold Wilson making those exact same points in a televised speech. I was already an affiliated member of the Labour Party through my union, the TGWU, but it was Galbraith and then Wilson who severed my "fashionable" involvement with the revolutionary left.

If you've managed to read this far you are probably wondering what all this has to do with Brexit and what on earth is the relevance of a Nantucket Sleigh Ride. Yes I'll get to the point. We now seem to be living through times of revolution and chaos felt most acutely in Britain but also in the US (think Trump), the middle east never more dysfunctional and we hold our collective breath in fear of the next African famine or scourge of disease. In both the US and the UK self serving politicians with the fervent backing of their own biased media have scapegoated immigrants for all the perceived shortcomings of society. The result in the UK is plain to see as our politicians fail to come up with an answer to a problem which is of their own making. The Nantucket Sleigh Ride analogy refers to the harpooning of a whale by men precariously hunting their prey from a small rowing boat. The harpooned whale would take off with fright, towing the row-boat behind them at considerable speed until all the strength of the great beast was exhausted. Being towed by the whale was dubbed the Nantucket Sleigh Ride.

I don't think I have to spell this out but .......... the UK politicians who campaigned for us to leave the EU have harpooned the whale of Brexit.
They are now being towed at great speed, clinging on to the gunwhales with white knuckles, praying that the blind panic of Brexit will soon run its course and that by then a plan will have emerged, how to deal with the bloodied carcass of our economy.

At least the Labour Party emerged from months of navel gazing to mount a serious challenge to the government last week. It is not unreasonable to ask Teresa May and her Tory team how they propose to tame the beast that is Brexit but the response that they do not want to show what cards they possess before they begin negotiations is vacuous. There is no trump card, no winning suit. Everybody involved with the negotiations, from May/Boris/Fox/Davies to Angela Merkel's dog knows that we are a busted flush.
Meanwhile the fat cats who fund the Tories make money out of the chaos as the rest of us pay the price of their selfishness .............. for as Galbraith said:

Finally- for those of a nostalgic bent

A link for those who cannot see the embedded video
Mountain - Nantucket Sleigh Ride
Posted by It's ok to listen to the grey voice at 14:50