It is a tale Told by an idiot, full of sound and fury, Signifying nothing.

Writing a blog like this you must always ask yourself the question, have I something that is worth saying or am I just adding my paltry two penn'orth in the delusion that what I say and think actually matters. With that in mind I strive for originality and one device that I turn to  is to make reference to a quote from someone better qualified than myself or to make an amusing link to a song which bears a similar message. With the title of this post, quoting Macbeth, I am obviously going for gold and trust that you are already ahead of me in imagining that Shakespeare wrote this pithy line with Trump in mind. The sound and fury bit is plucked from the Tomorrow and tomorrow and tomorrow speech spoken by Macbeth himself:

Tomorrow, and tomorrow, and tomorrow,
Creeps in this petty pace from day to day,
To the last syllable of recorded time;
And all our yesterdays have lighted fools
The way to dusty death. Out, out, brief candle!
Life's but a walking shadow, a poor player,
That struts and frets his hour upon the stage,
And then is heard no more. It is a tale
Told by an idiot, full of sound and fury,
Signifying nothing.

I was reminded of this when following up an interesting item in the Independent, How did Obama explain Trump's win to his daughters? where I read the following:

How did he speak with his two daughters about the election results, about the post-election reports of racial incidents? “What I say to them is that people are complicated,” Obama told me. “Societies and cultures are really complicated. . . . This is not mathematics; this is biology and chemistry. These are living organisms, and it’s messy. And your job as a citizen and as a decent human being is to constantly affirm and lift up and fight for treating people with kindness and respect and understanding. And you should anticipate that at any given moment there’s going to be flare-ups of bigotry that you may have to confront, or may be inside you and you have to vanquish. And it doesn’t stop. . . . You don’t get into a fetal position about it. You don’t start worrying about apocalypse. You say, O.K., where are the places where I can push to keep it moving forward.”

The Independent article was in turn a nugget taken out of a far more impressive piece in the New Yorker Magazine: Obama reckons with a Trump presidency by the editor, David Remnick. Check out the link; it is a well written read.

I know that Obama's words may not on the surface seem to chime with Macbeth but the similarity for me is in the quiet acceptance that all is underpinned by time. Perhaps the most impressive is the acknowledgement that you have to contend with your own bigotry as well as that of others. As I said, read the full New Yorker article and perhaps you too will see the common sanguinity of Obama and Macbeth.

In that New Yorker article Obama also spoke about the acceptance of untruths during campaigning and how just a few short years ago such distortions would not have been accepted.  He also speaks of the role of social media and how an truth (his example was of global warming) has no more prominence than an untruth. There is no quick fix for this but somehow we have to work out how to separate fiction from fact.

It was then quite apt that I chanced upon a film by Adam Curtis, HyperNormalisation on the BBC iPlayer. Here is the link: HyperNormalisation, a film to be found on the BBC website. I apologise to those who are unable to view media content on the BBC but I urge you to seek out this film as it plots the early years of several government's misinforming their citizens and their complicity in manufacturing fiction as fact following the withdrawal of US troops  from the Lebanon in the face of the new weapon, suicide bombing. It is a point of view that is well worth considering and it does echo Obama in that New Yorker piece. (going back to the climate debate):

That marked a decisive change from previous political eras, he maintained. “Ideally, in a democracy, everybody would agree that climate change is the consequence of man-made behavior, because that’s what ninety-nine per cent of scientists tell us,” he said. “And then we would have a debate about how to fix it. That’s how, in the seventies, eighties, and nineties, you had Republicans supporting the Clean Air Act and you had a market-based fix for acid rain rather than a command-and-control approach. So you’d argue about means, but there was a baseline of facts that we could all work off of. And now we just don’t have that.”

The HyperNormalisation film claims that a regard for evidence and truth was ditched in the area of foreign policy following the bombing of the US barracks in Beirut in 1983. Many now believe that there are governments that have extended such disinformation into other areas of governance, most notably in their handling of refugees, migrant workers, treatment of the impoverished and their complicity in the rise of unrestricted capitalism. The use of outright lies in both the Brexit and US presidential elections indicate that this trend is accelerating.

Unfortunately there are many who vote after hearing the tale told by an idiot, full of sound and fury, signifying nothing. 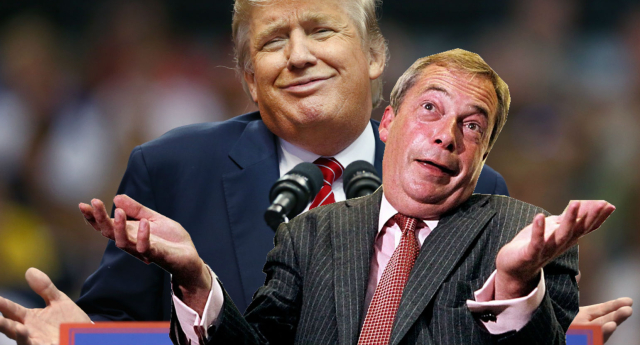