Those of you who have followed this blog for the past two years know that BelperStuff has in the odd post been critical of Jeremy Corbyn. A generous view would be that the blog tries to be even handed and it is in that spirit that these words are being written. 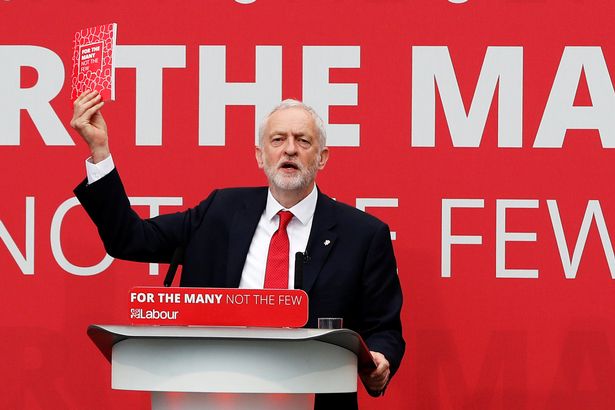 I've read it and am very impressed. The document is a reaffirmation of the Welfare State and the best part is that it is not an attempt to put back the clock but contains plans to re-invigorate state provision of services and infrastructure for the twenty-first century. The costings are credible and bear the hallmark of honesty when compared with the flashy eye-catching but uncosted pledges contained in the Conservative Manifesto. Don't take my word for it, follow this link to the Labour Manifesto.

The temptation to add the link to the Tory Manifesto has been deemed somewhat premature because Theresa May is busy rewriting it ............... tearing up their main policy on the funding of Social Care. The Tories have not and will never get this right because they have abandoned the simple principle that has underwritten the delivery of health and care services for the past 70 years, that we, as a society undertake to collectively pay for the wellbeing of the 65 million who live here. We don't need tax cuts, we don't need the profit motive as an incentive in the NHS and we don't need a "dementia tax". There is a refreshing alternative: Healthcare for all. I freely admit that it has taken the election of Jeremy Corbyn as leader of the Labour Party for such a manifesto to be produced. Reading through the document I was struck by the idea that all the ideas are positive ........ there is no desire to exclude or to deny or to point the finger of blame at anyone. Put simply, the inspiration is a love of people. It made me think of The Housemartins, Caravan of Love. Stand up and fight and join the caravan of love. (I am reminded of the Christians on the Left and the fringe meeting I attended at the Liverpool conference last year).

Blogposts not yet written will look at other aspects of the manifesto. Of interest are the plans to re-nationalise infrastructure services which are well thought out and costed. The press tried to claim that privatised industries would be bought back but careful reading of the manifesto shows that what Labour intends is to provide a state alternative, notably local publicly owned energy companies and there are obviously ways for the state to reclaim passenger rail services at zero cost. As I said, more on that later.