The General Election 2017 was initially dubbed as the one that nobody wanted and Theresa May was justifiably criticised for doing a u-turn on her pledge that this government would not go to the polls until 2020. There seemed little enthusiasm from party activists and the voters were particularly unengaged. This was summed up perfectly by  Brenda from Bristol who at the time spoke for the majority of the country when she found out that a snap election had been called:


Pumped up by fawning newspaper articles and sycophantic supporters the prime minister was tempted by poll ratings that promised a huge Tory majority .......... it was an opportunity too good to miss. Looking ahead to the political climate of 2020 with anticipated Conservative poll ratings likely to be negative in the post-brexit shrinking economy, compounded by 10 years of disastrous austerity, going for an election in 2017 was a Tory no-brainer. All Theresa had to do was keep her mouth shut so that the obvious paucity of Tory policies and ideas was not found out ..........  but .......... being so far ahead of Labour in the ratings and believing their own Corbyn bashing propaganda to be true the chance to make further cuts in government provision of services proved to be irresistible.

Make no mistake about the dogmatism that drives the thinking behind the 2017 Tory election manifesto ............ they are now getting close to the very heart of what's left of the welfare state ......... they want to rid the country of the principle of collective responsibility. The noble post war consensus that accepted the role of taxation in the provision of health services, social care, education, scientific research and improvements in infrastructure is once again under attack from the far right.

Then it all started to unravel. The public perception of  Theresa May gradually turned from strength and stability to one of uncertainty and indecision as the u-turns started to pile up to the point where she was going in ever decreasing circles. As the Tory contender became increasingly unhinged the public, and more significantly the press looked towards the other camp with a more open mind. Were Labour and Corbyn as bad as the Tories made them out to be? What they found was a well thought out manifesto which is more Maynard Keynes than Marx and a Labour leader who was coming across as being ........... well ........... electable. With bastions of the establishment such as David Dimbleby  stating that Jeremy has not been treated fairly by the press it is evident that the tide has turned; a fact underlined by an article in today's Times Poll predicts shock losses for Theresa May's Tories at the election. I did not go behind the Times paywall (never give Murdoch even a single penny) but it was possible to lift this predictive chart: 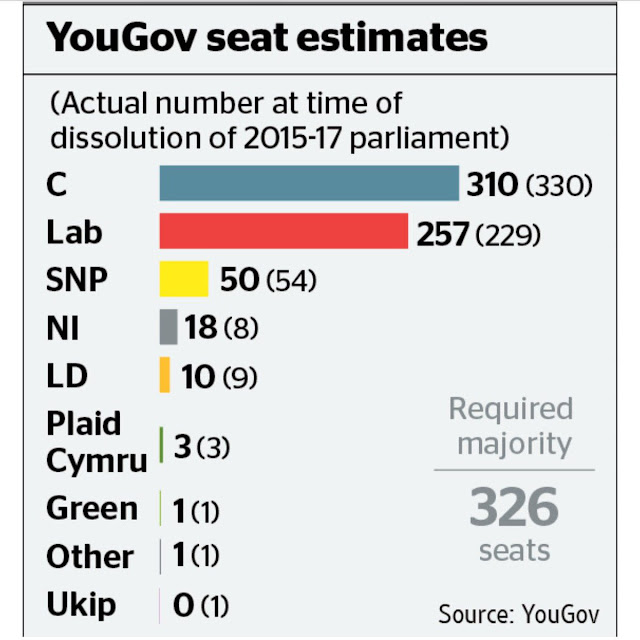 How accurate this proves to be will only be known some time early on June 9th but such a forecast would have been unthinkable even a week ago. This is a tantalising glimpse of a possible coalition of the left with Labour not just avoiding melt down but actually increasing its seats in parliament. Please let this be true .......... though it pays to keep your feet on the ground and this article in the Guardian commenting on the YouGov poll puts it into perspective.

Why is it possible that we can contemplate Tories losing their majority?

Put simply the voters are starting to realise that Corbyn and Labour are not as bad as the media would have them believe and that Tories and May are far less attractive a proposition once the spotlight is turned upon them. The 8th June could become the defining example of the meaning of the word  "hubris" .............. or perhaps it's this: Anti Theresa May track "Liar Liar GE2017" nears top of official singles chart

Apparently if you download this track from iTunes or Amazon (and probably other places that an old fart like me would never have heard of) you donate to both the Peoples Assembly against austerity and to foodbanks. Couldn't resist so I paid my 99p. (A link to Liar Liar GE2017 for those who receive this post by email)