The Labour candidate for the Mid-Derbyshire seat, Alison Martin was about early this morning campaigning at Belper Railway Station.

The message that Alison brought with her was one that Belper commuters well understood as they crammed onto the two coach train for their journey into Derby or Nottingham (sometimes it's just one carriage). The board being held up by Alison and her supporters puts Labour's pledge in a nutshell,

"Ticket prices have gone up by 27% since 2010. Travelling by rail should be affordable and hassle free. Labour's plans for rail will improve things for passengers".

Below is the leaflet that was being handed out and Alison said that she stood by every word. 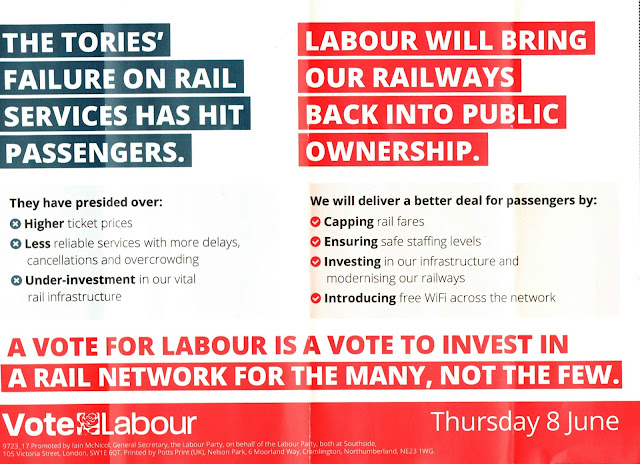 The Labour pledges are very specific and deliverable, for instance the plan to cap rail fares can be implemented within current franchise arrangements: Labour promises to save average rail commuter £200 on a season ticket - article in the Guardian and ensuring safe staffing levels will be good news for Southern Rail passengers who have been plagued by the failure of Connex to provide an adequate service. Free Wi-Fi is enjoyed by first class passengers on some routes so extending this to all trains and all passengers is in keeping with the Labour slogan of "for the many not the few" ......... and it costs comparatively little. Modernisation is touched upon later in this post.

On a more general note it has become very clear that the Labour Party policy to renationalise rail is very popular with wide support, not only with voters but also with industry experts ............. as the Guardian comments in a recent article Labour renationalisation ............, "Academics have found private operators no more effective or efficient than public owners. Money is usually the key. The trains are safer and popular with buckets of public investment".

At the moment, those buckets of investment provide rich pickings for the 23 private companies who operate the rail franchises with an average annual profit margin of 3.4% (see here the Full Fact.org article) but research by the Centre for Research on Socio-Cultural Change in a report entitled "The Great Train Robbery", highlighted the fact that private rail operating companies invest very little of their own money, in fact earning a return of 147% (sadly the links now seem to be broken).This is what the Nobel prize winning economist Joseph E. Stiglitz named as "renting", where a private company is allowed to make a profit from public investment (just enter the name Stiglitz in the search box to the right of this blog to find out more).

If you've followed all those links you will now know that the rail network is already owned by the state (that's us) and that renationalisation of the passenger rail franchises would not cost a penny as the state would simply take over franchises as they come to an end. It would take a few years but you could find that some companies would choose to hand back the franchises early to avoid late franchise costs ( as was done by National Express who handed back the East Coast franchise which was then run by the state between 2009 and 2015). Privatised railway economics is an absolute minefield but using the state run East Coast franchise as a yardstick (annual average payment to the exchequer of £200 million, foregoing a profit of £19.9 million a year) we can see that renationalisation alone could make an extra £304 million a year available for investment in more carriages to reduce the chronic overcrowding, help lower fares or improve service levels and frequencies. If you factor in the whole edifice of franchise bidding (£5 million per company per bid) plus the extra levels of management involved in activities like financing and contract negotiation then the annual net savings could be far more than that.

Putting this into perspective, to add a single carriage to the trains that stop at  Belper on the Matlock service would cost at most £1.5 million to build and add additional costs per year for fuel and maintenance (back of fag packet calculation - somewhere in the region of £250k per year - if anyone can provide a more accurate figure then please leave a comment). The East Midlands franchise makes an annual average profit of £16.6 million which, if reinvested, would fund many more carriages and help pay to run them.

It should be noted that environmental, engineering and safety standards have changed in the past 30 years (the trains operating the Matlock service were built in 1987) so a decision to increase capacity by simply adding a carriage could involve a more general refurbishment of the existing carriages -----  so it's not that simple.

However, the opportunities that follow from renationalisation are very apparent. Before anyone asks, these calculations do not include freight operations which play a minor part in the overall cost of railway provision and we haven't even mentioned the Tory failure on electrification but if you want to know more type the word "electrification" into the search box to the right. Then of course there is the big question of who exactly owns all these trains? Successive ministers of transport crow about the millions being invested in new trains but whose money are they spending?