The performance of Amber Valley Borough Council is becoming more and more disturbing. This blog has referenced AVBC quite a few times, admittedly never from a position of approval except for that one post about homelessness in Belper when the diligence and obvious compassion of the council officer involved was duly noted. I am sure that there are other officers who are equally as involved with their allotted responsibilities but I fear that they are battling against overwhelming odds. I am trying to hold on to this belief though a recent development in the inspection process of the AVBC Local Plan has once again led to questions of competence. The nub of the Local Plan is to allocate land for the development of 9,770 homes within the time period of 2011 - 2028. There is also an added imperative that development should not be delayed towards the latter end of this period so AVBC has to demonstrate that 5,000 homes will be built in the initial 5 years. In the real world the 5 years started in 2011 but in the world of Amber Valley the 5 years starts now. According to Labour Councillor Ben Bellamy AVBC had spent over £1 million by 2017 on unsuccessful attempts to produce a plan (see here Ben's excellent article in Nailed - Belper Independent news).

It is obvious that AVBC has been struggling to produce a viable Local Plan for some years and yet again their shortcomings have hit difficulties during the inspection process:

Following the review of the Green Belt, the Council will then consider whether any potential sites within the Green Belt, including that which forms part of the Land North of Denby, could be identified and proposed as Housing Growth Sites, including the assessment of Reasonable Alternatives. A Sustainability Appraisal will also be carried out.

This map is helpful in understanding what land is being considered : 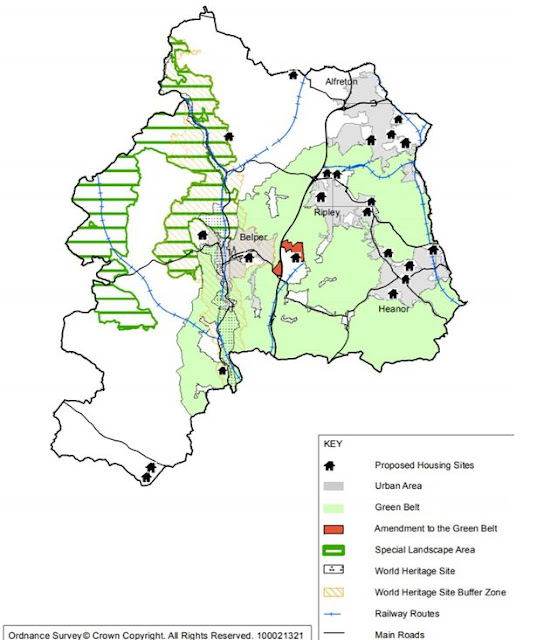 This map which is included in AVBC's Local Plan clearly identifies the green belt land that is to be considered for development. AVBC is employing external consultants to carry out this appraisal which, as the council admits, is looking solely at green belt land re-designation. This is not just waiving the white flag of defeat but a clear statement that after years of election promises to voters this Tory administration is willing to renege on their pledges (for more on this see here .........and also here where the Tory record of building on green belt land is explored plus Labour's opposition to it). Apologies for the seeming incestuousness of referencing earlier BelperStuff posts but they do contain some interesting links.


There is another way - the alternative of Brownfield site development

Here in Belper there has been a spirited opposition to development of greenfield land such as Bullsmoor and Belper Lane and we can now see that Neighbourhood Plan for Belper has taken this on board with their strategy of restricting any large scale development in the parish to brownfield sites (see here NP4B Viability study of brownfield sites for the Parish of Belper). The majority of these sites are contained within the AVBC Local Plan but they have relied solely on the planning applications by developers to determine the number and types of housing that would be built. NP4B has realised that the AVBC plan envisages larger homes configured to a suburban density; for instance the Arbru site in Milford comprising 136 homes has a density of 22 dwellings per hectare. By raising the density and type of dwelling ( less bedrooms to suit starter homes and downsizing from larger homes on the outlying estates) to 30 and 50 dwellings per hectare, which is more in line with the urban nature of these sites the target figure for development in the parish can be contained on brownfield sites. Indeed, with careful planning these sites could provide the homes needed for the next 20 years without recourse to development on green field or green belt land. This depends upon the NP4B being passed at a referendum and a methodology being found to produce the homes that are desperately needed rather than the AVBC method of relying on what he market decides to build.

So what should AVBC do?

The simple answer is that the borough should decide that:

Has AVBC done any of this?

Last year I shared a conversation with a Tory borough councillor (representing Duffield) who boasted that, "we have reduced Amber Valley staff numbers by 134 ......... that is the way you manage local government". He said far more than that but I found his comments so unsavoury that I'll not repeat them here. I could see that he was convinced that staff cuts were a good thing but when I pointed out the consequences of a reduced planning department that was struggling to deal with planning applications and produce a viable Local Plan he could not see the connection.  The point was not lost on me that he measured borough council success on how much money could be "saved" by making staff cuts rather than the council serving the community in a meaningful way. It is the mentality of small government.

The Councillor's belief that the market will supply the homes needed without any intervention by local authorities is current Conservative thinking and has been since the Thatcher years so he's not alone. The evidence however does not support this belief: 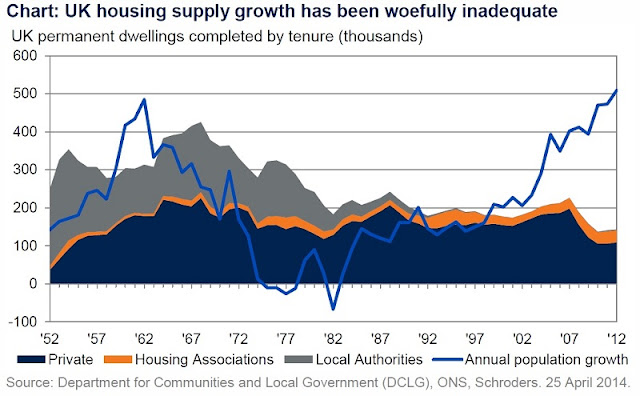 The private sector and housing associations have proved to be inadequate providers of new homes for a growing population. Privatisation of housing supply has failed. For anyone who believes in smaller government and the primacy of private companies in dictating what and where is to be built a chart such as the one above will cause them to have a headache. So what do they do? The evidence disproves core conservative doctrine ........... the only way is to let private developers loose on virgin land whilst in our town centres old industrial buildings rot.

But what would Labour do?

We will protect the greenbelt, and prioritise brownfield land for development. (an extract from their 2017 Housing Manifesto - New Deal on Housing

This is also the policy of local Labour councillors.