HS2 will reduce number of East Midlands trains through Derby

A 2015 BelperStuff post explored the claim of Alistair Darling that building HS2 would drain money away from the existing rail network. He was rubbished by the then transport secretary Patrick McLaughlin who eventually went on to postpone the East Midlands electrification. The sorry saga of political shenanigans has taken the odd twist since then, first reinstatement of electrification but eventually cancelled by the incoming transport secretary Chris Grayling once the 2017 general election was safely out of the way.

I suspect Alistair Darling of possessing a crystal ball because the reasons finally admitted to by Grayling for cancellation was that the cost benefit ratio for electrification of the Midland Mainline (MML) was now so low that it made more economic sense to use by-mode trains that could run as electrics under wires and diesels everywhere else. The MML wires would only go as far north as Kettering with a branch off to Corby. Trains to Derby, Nottingham and Sheffield would be diesel powered. 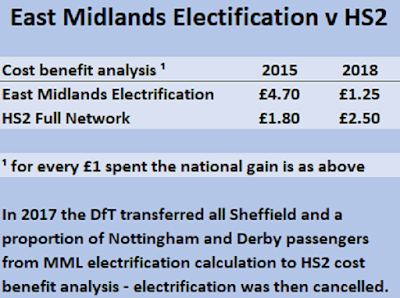 HS2 would, by 2033 carry all Sheffield passengers that currently use East Midland trains.

That was the justification for cancelling MML electrification, just as Alistair Darling predicted. The Tories went into 2 general elections promising electric trains and improved services on the MML only to break those promises to shore up the weak economic case for HS2.

(In the accompanying cost benefit chart only the minimum benefits have been listed but it should be noted that the MML scheme ranged from £4.70 to £7.40. The HS2 figure was scrutinised in 2016 by the House of Commons Account Select Committee who found that it should be nearer £1.10).The true costs will emerge in time but many believe that Phase 1 between London and Birmingham will go so far over budget that Phase 2 will never be completed. (More of that in a following post).

But what of the future?

What does this mean for East Midland trains? Grayling has already stated that HS2 and the West Coast franchise passenger service (WC) will be merged with first contracts to be signed as early as 2019. The consequence of this is that a significant number of MML passengers will be counted as HS2/WC passengers which will make East Midlands Trains loss making. The DfT and HS2/WC will move to deter passengers staying loyal to the MML route to St Pancras so a decrease in the number of MML trains would seem a likely outcome; the existing East Midlands services will not survive in their present form so our 2 trains an hour from Sheffield and similar 2 trains an hour from Nottingham will at best be cut back to 1 per hour .............. the Sheffield services may be cut back to Derby with Chesterfield, perhaps with the most to lose, served by Cross Country trains (though even these are under threat from HS2).

Even if my pessimistic view is proved wrong (and I don't think it will be) we will be condemned to a second class service on the MML. Already the trains are slowing:


These timings are partly the result of  more intensive Thameslink train services south of Bedford resulting in slower running MML trains and more time spent changing trains at Derby. Electrification of all East Midlands trains to London was originally planned for 2019 and would have mitigated against these extended journey times.

Grayling says that new by-mode trains will perform just as well but does not say when these new trains will be available. The surprise is that the railway industry has not called Grayling out on this because the technology he proposes will add to operational costs and struggle to match the existing Meridian performance levels. The current East Midlands Meridian fleet were due to be cascaded to other routes with the InterCity electric trains currently working on the East Coast mainline (Kings Cross <> Leeds/Edinburgh etc) moving over to the MML. This will not now happen. The Meridians were built in 2003 and have an expected minimum life of 25 years so could be around on the MML well after HS2 is introduced in 2033. Can we believe Chris Grayling when he says that new by mode trains will replace them before 2033? I have serious doubts. Whatever the outcome we here in Derbyshire will suffer diesel fumes for years to come. Grayling tries to placate environmental criticism of the continued use of diesel by claiming that the hybrid trains will eventually be converted from electric/diesel to electric/hydrogen power yet this is a technology that is unproven in such an environment as the MML.

What we need in the East Midlands is a transport strategy that delivers what local people need and not counted as makeweights used to bolster an HS2 scheme that is seriously flawed. Only 27.3% of East Midland passengers travel to London, whilst a similar number stay within the regional boundary, basically short commuting or shopping trips to local centres. The main growth is seen on cross country routes to the North West, North East and West Midlands. Just how HS2 can improve these journey experiences is debatable once we factor in the necessary transfers to and from Toton. If anything, the passenger journey data underlines the case for re-opening the through route to Manchester via Matlock .......... I am sure that the cost benefit ratio for the old Midland route through the Peaks would make interesting reading.


That 13% of East Midlands passengers are journeying to the West Midlands is significant (around 4.6 million per annum) though a fair proportion of these are travelling to and from the Leicester area which is bypassed by HS2. For East Midland passengers in the Derby area HS2 offers no real benefit for travel to Birmingham, the added mileage to Toton and extra time changing trains eating away at the fast HS2 journey time to Birmingham Curzon Street. There is claimed to be a benefit for Nottingham <> Birmingham passengers but here there is a much cheaper and immediately deliverable alternative ............... a fast connection utilising the freight branch between Sheet Stores Junction (near Long Eaton) and Burton, thence to Birmingham. This would be an additional service that would cut the current 74 minute journey to around 50 minutes by avoiding Derby. This offers a centre to centre journey time comparable to the 44 minutes claimed by HS2 for a fraction of the cost. We are talking of a couple of cascaded diesel multiple units to maintain an hourly service that could even offer new journey opportunities for the good folk of Burton. The resultant loss of journey opportunities on the Derby <> Birmingham route would also have to be addressed but there would be no loss of capacity as astute Nottingham passengers would avoid trains routed through Derby.

The usual justification cited by those who promote HS2 is the claim that we desperately need more capacity. The next BelperStuff post should perhaps take a look at this and perhaps try and make sense of some of the doom-laden forecasts of spiraling HS2 costs. The bill so far is at least £2.7 billion and they haven't even started building anything yet.