Thinking back to yesterday's post I realise that it was somewhat on the darkside. BelperStuff proclaims itself to be a humorous look at politics from the left so today's post will hopefully redress the balance even though we are exploring the concept of inequality.

To those who were foolish enough to follow the link to Jan Fabre's video I apologise by bringing to your attention another Belgian talent, this time a musician; Admiral Freebee (taking his name from a reference by Jack Kerouac) is much loved in Belgium and I particularly like this song:

The Welfare State exhibition at the M HKA started me thinking about the differences between Britain and Belgium. Only two days before at the function we attended (a book launch) it was all about the similarities and a world without borders but looking at the Belgian concept of a Welfare State made me concentrate on the differences. There are many Belgians who look across the North Sea at the much privatised UK, fearful that the effects of Thatcherism and misguided Osbornomics might take a hold in their own country. Belgium is undoubtedly more equal as a society than Britain but how long this lasts, nobody can tell. The mood in the EU and a possible diminution of elements such as the Social Chapter is of real concern as right wing governments such as the Tories in Westminster push for a weakening of state sponsored welfare. Changes such as these would have consequences for countries such as Belgium that still try to maintain a positive social framework.

So what are the differences?

I found a very interesting piece of research here: European Commission - Social Situation Monitor - Income inequality in EU countries. This compares the relative wealth of countries and reports on the distribution of wealth in the EU. Use is made of the Gini coefficient to give a level of consistency to the generated figures, described within the article thus, "The most widely used measure for income inequality is the Gini coefficient. The maximum possible value of the Gini coefficient is 1 (when one individual has all the income in a country), while the lowest value is 0 (when everyone has the same income)".  The following chart is perhaps the most illustrative: 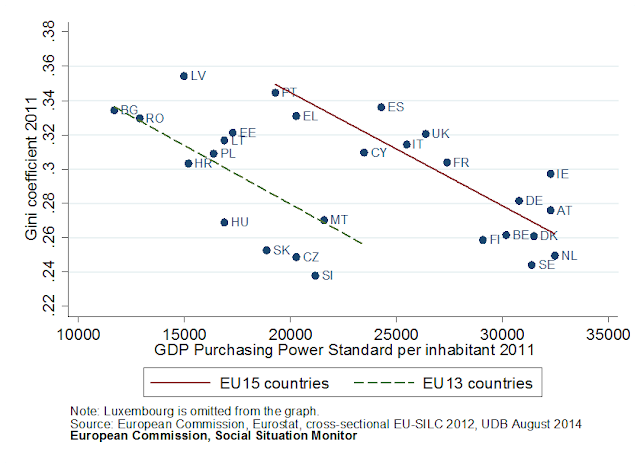 This shows us that Belgium (BE), in 2011 had a Gross Domestic Product (GDP) of around €32,000 per inhabitant whilst the UK was way below this at just under €27,000 per inhabitant. Woeful British productivity is a major factor in this bad performance.

If we refer to the left vertical axis of the chart which measures the Gini coefficient it becomes apparent that here too Belgium outperforms the UK with a figure of 0.26, whereas the UK scores 0.32, which means that the wealth generated in Britain is concentrated in fewer hands, gravitating towards the rich whilst the poor get less. In comparison, wealth generated in Belgium is more evenly spread therefore the UK is a far more unequal society.

The UK is in fact one of the most unequal states in Europe ......... but the Tories call this a success.

This post started out on a lighter note but soon reverted to type. Perhaps another song from Admiral Freebee will make amends:

Vaarwel
Posted by It's ok to listen to the grey voice at 13:45