The Welfare State - a visit to Antwerp

It may seem to be an astonishing fact but the BelperStuff editorial team do possess passports and do at times venture abroad. That's why the blog has been quiet for a few days as a journey was made to Belgium .............. to be exact to attend a function in Antwerp. I will not dwell on the nature of the event we attended save to say that it was over fairly quickly so extending the visit by a couple of days afforded an ideal opportunity to explore the rich cultural life of the city and of course to add a few more names into my densely annotated "bars that I have visited" notebook. Oh yes, Antwerp is indeed the place where life is lived between beers. 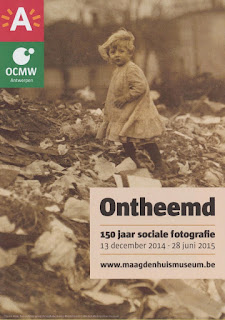 We've visited Antwerp many times but despite repeated attempts have never managed to exhaust the supply of museums. This time there was a decided social theme to our choices with "150 years of social photography" at the Maagdenhuismuseum (formerly an orphanage for young girls) and then an exhibition entitled, "The Welfare State" at the Museum of Contemporary Art Antwerp (M HKA).

The photographs charted some of the most poignant and painful episodes in our history since the invention of photography, from the devastation of Gettysburg, the inhumanity of the Nazi death camps to more recent deprivation in mental institutions. The exhibition featured the work of many photographers and was spread across the rooms and annexes that make up this complex. One room, reached via a long corridor lined with small snapshots of homeless people turned out to be the refectory of a legal school, the moribund serving range screened off from the body of the hall upon whose walls were hung heartbreaking images of unwanted Indian girls, the afore-mentioned mental institution inmates and then immigrants and asylum seekers, holed up in squalid shacks, waiting for the world to decide what to do with them. On the day the emotion that rose to the surface was a a concern for the loss of dignity of those being photographed, a feeling of distasteful voyeurism that led me to initially criticise the very nature of the exhibition ........ but ....... in the couple of days since the visit the sheer enormity of the misery and loss of life and potential has seeped through me and now I forgive the urge to capture such images. We become hardened by the familiarity brought on by daily repetition of images in newspapers and on our TV screens but by bringing these photographs together in one place we are reminded of the sheer scale of senseless suffering and of the fact that decade after decade, century after century we fail to learn the lessons of war and poverty. Our so-called leaders making the same mistakes over and over again. 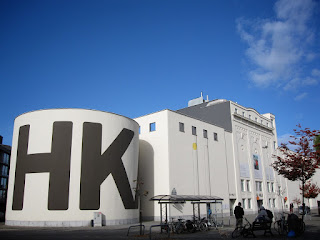 So, it was with a hope of a more comfortable experience that we took the tram to Antwerp Zuid and the Museum of Contemporay Art ....... M HKA. What could be nicer than a celebration of "The Welfare State". All would have been well if we had gone straight to the second floor but we made the mistake of innocently strolling into the hell of Jan Fabre on the first floor. His retrospective, entitled "Stigmata" was a series of videos of his art performances and a veritable sea of tables on which he displayed the instruments, tools and odd objects that had been used in the making of the performances. Coming fresh to the world view of Jan Fabre is quite disconcerting as you gaze at his ever more manic attempts to suffer for his art .......... and this is the root of the problem. He observes, in this video in which he talks about himself that the inspiration he gained from the suffering experienced by Flemish artists as they made their art was the wellspring of his work. Unfortunately he confuses the pain of self harm, his predominant theme, with the incidental pain experienced by the masters that accompanied their creative process. Perhaps a preoccupation with the process is inevitable in performance art and if that is so then surely it is unwise to make a comparison with an artistic form where the product, such as a painting is viewed without any reference to the struggles of the artist.

Eventually we escaped upstairs but the madness and noise from Stigmata could not be avoided as it rose up through the floor. I spoke to an attendant who ruefully commented that the quiet as they arrived for work, before they switched on the videos,  and the peace that descended on the museum as they turned off the lights at the end of the day was sheer heaven. The vision of Dante summoned and dismissed at the flick of a switch. Discussing the exhibition on the train home my better half commented that Mr Fabre lacked intellectual depth. If you are a masochist and enjoy a man sandpapering his legs for your artistic pleasure then you have a couple of months before peace once more descends upon the M HKA during daylight hours.

Now, thankfully to "The Welfare State" ......... link to the exhibition .......... and what a joy this was. Finally, eight artists and their comments on attempts to mitigate the deprivation caused by war, disease, hunger and ignorance. The exhibits comprise a wonderful display of poster art, sculpture, photographs, juxtapositions and film to look at the role of the state and a care nations' care for its people. The accompanying book (at €2 an absolute snip) introduces the exhibition with a well written piece by Anders Kreuger, who details the fundamental principles and objectives of the move to state care and basic services across Europe, most notably post WW2. It was somewhat disquieting to read of the easy acceptance of the idea that the welfare state is in decline ............ the reason being that from the early 1970's oil crisis world economies have been under pressure, the post war period of high growth coming to an end inevitably reigning back the investment in social expenditure. "Let us indeed remember that want, disease, ignorance, squalor and idleness - the "five giant evils" (yes Beveridge is quoted) - have not yet been vanquished." 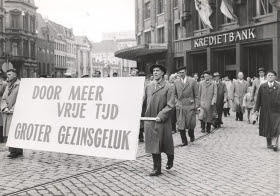 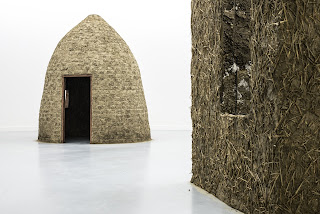 Kreuger cites the Flemish economist Herman Deleeck, latterly of the Belgian CD&V party and in particular to his critique of the "paradox within the post-war Western European welfare state, which he named the Matthew Effect, after Matthew 13:12, "For whosoever hath, to him shall be given, and he shall have more abundance; but whosoever hath not, from him shall be taken away even that he hath"" Of course, as Christians point out, this was a reference to the rewards of faith but using this quotation as short hand for the outcome of current political "wisdom" seems very apt. One cannot help thinking of Conservative doctrine in the UK, but now, sadly a Labour Party that feels compelled to join with the Tories in lowering the amount of benefits that a family may receive. This article in the Independent has shaken me to the core. It's as if Jan Fabre has been recruited as a strategic thinker by the Labour Executive. The drift away from collective responsibility, justified by the complacency of those who "hath", inevitably leads to the number of those that "hath not" increasing as inequality becomes an accepted fact.
The trip to Antwerp was certainly stimulating, from the photographic art chronicling the suffering inflicted upon humanity over the last 150 years ......... to the 40 years of self-inflicted pain of a minor talent ............ to the efforts made in the last 70 years to alleviate suffering and to lift society onto a higher plain.

Thank goodness that Belgium supplies those of us possessing an unprotected mind with such a copious selection of soothing liquids for the brain. 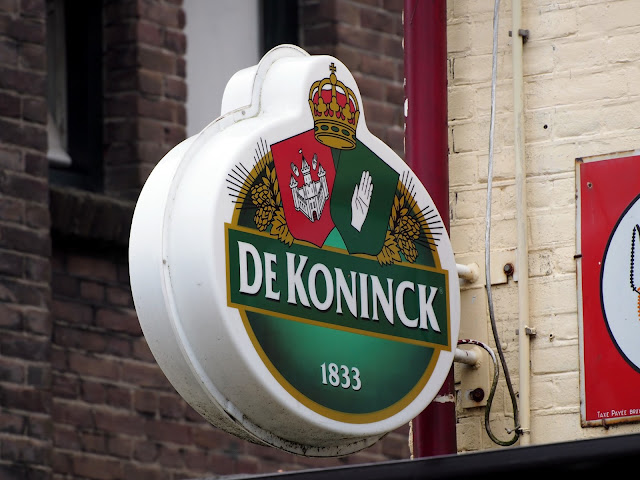