Just as the internet ink was drying on this BelperStuff post: Local Tory housing strategy in ruins Derbyshire County Council (DCC) announced that they planned to build houses, a direct response to the housing shortage and the inability of private developers to cater for the local and regional need.

Here is the link to that press statement: We'll be building homes

Hopefully I will be forgiven for pointing out that the DCC has a Labour majority so have no qualms in stepping in when the marketplace fails to deliver; in direct contrast to the pathetic response of the Tory controlled Amber Valley Borough Council (AVBC), a council that offers no solutions to the housing shortage that blights the lives of so many families. Over the years the Tory AVBC has boxed themselves into corner by rigorously applying the Thatcher doctrine of selling off council homes and other assets which used to provide the borough with much needed revenue. Prior to the setting up of what was to become Futures Homescape, the housing association which took over the role of provider of social housing, there was a concerted effort to rid the council of these assets. There were incentives to buy the council house you lived in or to vacate your council house and buy a private dwelling. This led to a decline in the number of houses available to those on lower incomes as sufficient replacement houses for those sold off were never built. We have to ask some fundamental questions and I would suggest these for a start:

These are very basic questions to ask, not just to be critical of past and present governments but to provide a framework for discussion on how best to cater for housing in a society that is driven by home ownership whilst a growing number of citizens have no hope of ever becoming homeowners. This is why I welcome the initiative of the Labour councillors controlling the DCC; they recognise the need so just get on with the business of solving the problem. The spirit of '45 is alive and well and meets regularly in Matlock.

"This ambitious project aims to provide some much needed homes for the county, and generate income so we can fund vital local services".

with this from the AVBC:

" ....................Regrettably, however, despite the fact that there are many sites within the Borough that have been given planning approval by the Council, the Council has no powers to force developers to start building the houses, or influence the timeframe over which a site is developed.”

It should be said that individuals, many of them Labour supporters, have over the years benefited from the right to buy but we should realise that they were residents who had sufficient incomes to be granted a mortgage. The effect was that housing subsidies such as discounts and incentives were handed to the better off rather than those on inadequate incomes. It has been reported that a third of all council homes sold off under right to buy were in the hands of private landlords: see this Daily Mirror article from 2013 where these two comments stand out:


This massive shift of housing from public to private is a major tax burden as rent subsidies have ballooned over the past 3 decades, money paid out to private landlords for houses that used to be owned by councils. Whereas rent subsidies used to be an internal council cost, paid for by council revenues from the housing stock the current rental benefit is paid out to a private landlord. So this great Tory housing initiative has resulted in a situation where the state, be it national or local government, hands over vast amounts of cash to the private sector for the provision of homes that were sold to them at a discount rate. The stupidity of this beggars belief. I urge you to read the Daily Mirror article linked to above for further insights into who has gained from this absurd strategy.

It is evident that local authority housing played a crucial role in house building and that once cut by the Tories the promised increase in the private sector provision never took place. Obviously such a graph has to take account of economic cycles but the overriding fact is that we cannot rely on the marketplace to supply the homes that our society needs. This is realised by the DCC and that is why their initiative is so important.

The Daily Mirror article has prompted me to look once again at the original research done by BelperStuff on the distribution of the increased wealth of the UK, how the sums implicit in a growing GDP have drifted towards the already wealthy ......... here is that graph again: 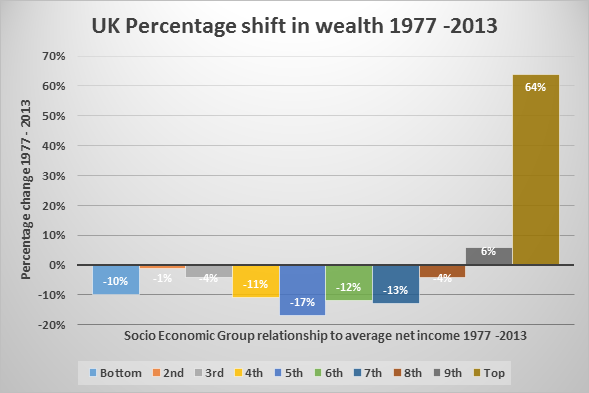 It should be remembered that a random juxtaposition of data is unscientific but the fact that the decades that have seen an inexorable drift of wealth towards the wealthy have coincided with the very same decades there has been a relentless shift of ownership of assets and services from the public to private sectors. Two major shifts in the fabric of our nation ............ in my mind they are linked.