The Guardian featured an article on Saturday commenting on the appeal of Donald Trump with women voters. I don't usually comment upon the politics of other countries ......... well it's just not good form is it. The USA should be allowed to enjoy their own hustings and primary jousting without interference from a Brit but Trump is topical here in the UK because over half a million UK citizens added their names to a poll requesting parliament to debate whether Trump should be banned from entering the country because his comments about Muslims and Mexicans would possibly constitute a breach of the law if he made them here. I am not proposing to enter into any debate about who the US or the UK should bar from entry but I am beginning to think that the well known children's classic, "Alice in Wonderland" has been adopted as a model of political philosophy. But first ........ I could not resist reproducing the photograph that accompanied the Guardian article:

The British press has a lot of fun with Trump and could not resist reporting his endorsement by Sarah Palin. Like a moth to a flame I just had to watch the video even though I knew that barely seconds in I would be watching it through the chinks between my fingers, hand to forehead in disbelief. It takes guts to stand up there and I cannot help admiring the sheer teflon quality of her public appearances. I have a sneaking belief that her arguments are perfectly logical and fluent (although not to my taste) but somewhere they get lost between the brain and lip .......... rather like a car turning up a blind alley and what we get get to see is the painful 3 point turn manoeuvre.

Trump is obviously a symptom of a disenchantment with the system that is not confined to the US but has gradually taken over the World in the past 40 years which has left many feeling disenfranchised, stigmatised and forgotten. There are always chancers who see an opportunity to profess half baked homespun remedies, goodness knows we have enough of those here in the UK. The real danger is when their ideas become accepted as mainstream wisdom. It is the willingness to choose prejudice over evidence, political dogma instead of fact that is so palpably evident.

This is not new 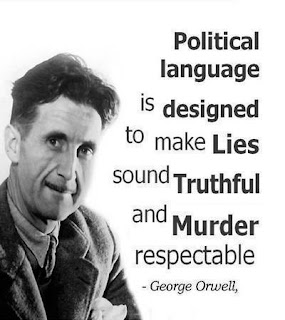 George Orwell, the archetypal cynic and outsider possibly said it best. Politics is so often the art of distortion that the beneficiaries of political thought (that's us) crave a genuine voice speaking honest simple truth. Unfortunately there are those who claim the mantle of "truthsayer" when in actual fact they are deliberately bending the truth. George Orwell's pithy remark about political language was a result of his experience witnessing the rise of fascist and totalitarian states. In his book, "1984" he showed how the truth can be manipulated and then used to consolidate power in "Animal Farm". I don't think he would find the 21st century to be any different to the last. Politicians use a language that makes a lie seem truthful and murder of innocents mere collateral damage. If anyone in politics dares to speak the truth then they are pilloried by the establishment ......... an establishment whose apex has shrunk to a size that could fit inside a Davos hotel meeting room. I hasten to add that I don't subscribe to theories of conspiracy. Power stems from money and the control of global resources. You don't have to conspire to achieve that; merely start off from a position of privilege and by incremental acts of self interest your power and wealth will increase. There is enough evidence out there to prove that point .......... you don't have to look far but you need to see beyond the words of our leaders because those we elect to look after our interests, our society, our nations, they too are dependent on wealth to become elected. Try to gain votes against that vested interest and you are pilloried and demonised by a media that is owned and controlled by those same vested interests. I'm not here claiming any new insight; look inside yourself and you know this to be true ......... the mud sticks, the lie is believed.

So how do we counter this?

If only a simple sentence written by a weary fool in Belper could in any way effect some change to a system that is so obviously out of step with what our planet and the people who live on it need. All that can be done is to continue to point out inaccuracies and untruths, shine a spotlight on the evidence so that decisions that govern our lives are made in a logical manner. The problem is that we are spoilt for choice here in the UK because we suffer a government that is so obviously short on logic and coherent leadership. There are countless examples at all levels of government. Many of these "inconsistencies" have been the subject of BelperStuff blogposts and there seems to be little to report that is in any way encouraging.

The haves have more ............. the havenots have less ............... those who protest are subject to changes in the law that diminish their ability to protest (legislation to curtail or inhibit the right to strike; to make the funding of democratic movements nigh on impossible); those who try to make wise judgements via democratically elected bodies about planning applications on housing and fracking having their power taken away by central government; the death of the welfare state by a thousand cuts; the blight that is the future of the young, the infirm and the impoverished ........ the consequence of the abandonment of the postwar social contract. All this follows as we (or rather they) shrink the role of government and move to a society where services depend on profit. It is happening in the UK, the US and many other lands.

Immediately upon posting I was sent a response from a friend living in Belper suggesting this link:

The Intercept - Glenn Greenwald comparing the Corbyn/Sanders experience.
Posted by It's ok to listen to the grey voice at 18:20