A month ago three Derbyshire residents visited Bamberg, a beautiful town in Franconia which is in northern Bavaria. Two from Cromford and one from Belper (your BelperStuff editor). We stayed a few days, a combination of business and pleasure and on our last evening we had dinner in a charming restaurant come beerhouse, the Kachelofen.

We three sat at one end of a long table enjoying local dishes washed down with the very distinctive Bamberg Rauchbier (smoked beer - if you are interested try this link Wikipedia explains smoked beer). Three young people joined us, sitting at the other end of the table. They were students, a couple studying business and the other pediatrics (to become a Kinderkrankenschwester or children's nurse).

We started chatting and were eventually joined by another German, a retired chap vising from Bonn. The discussion moved on to the issue of Europe and the upcoming summit in Brussels where Britain was seeking certain opt-outs. The man from Bonn wanted to know what each of us Brits thought of the EU and would we be voting to leave. We took it in turns to speak and it emerged that all three of us wanted to stay in though one had concerns about immigration and jobs, the younger of us three was somewhat relaxed about it all whilst my view was that it was time that Europe grew up and start to deal with the real issues of poverty and inequality within the union and a more cohesive and a more statesmanlike position on the big issues of the day such as refugees and the environment. We then asked the Germans to state their view and all four wanted the UK to remain as members of the EU. Each of them said that Germany needed Britain to stay in and that we had many common interests that were best served by continuing as partners.

We spent a lot of time discussing refugees and, following my statement that Germany had opened its borders as the birth rate had decreased resulting in the country facing a demographic of an aging population, immigration thus bringing an influx of younger people of working age. The issue of integration was to the for but then one of the young women said how difficult it was for young Germans to start a family as the problems of finding adequate work and housing had resulted in many opting to defer having children until well into their thirties. Of course the situation in Germany is not too dissimilar than that in the UK.

So, a UK/German debate on EU membership; the vote being 7 to remain in and 0 to leave. Of course the reality is that even if those four Germans lived in the UK they would not be allowed to vote in the referendum. There is an interesting article on who is eligible to vote here: Who can vote in the referendum - Jon Danzig's blog. The accompanying graphic is good: 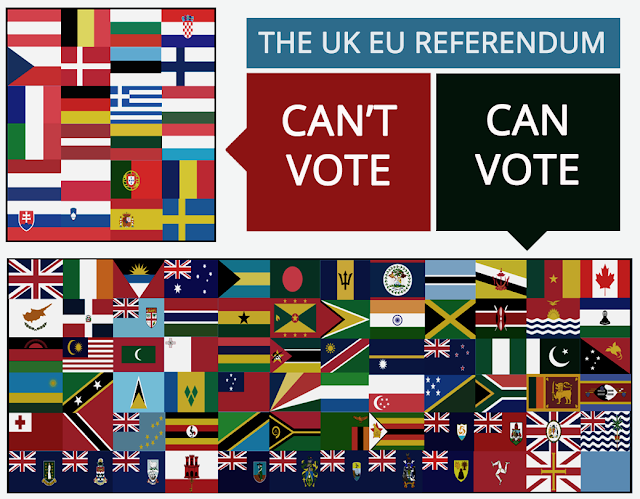 It is important that we don't get locked into a "little englander" bubble with this debate. We must see the wider issues taking into account what a leave vote means to Scotland, Wales and Northern Ireland ............ in fact the consequences for our trading partners throughout Europe and the rest of the world.