The subject of underground coal gasification came up the other day and I remembered writing about it here: Labour Party Conference 2015 - People , meaning to follow it up but other issues crowded it out. At the conference I spoke to delegates from the North East who warned of the imminent threat of UCG in their area. We spoke of Easington and the fear that a large stretch of coastline could be at risk of subsidence or possible explosion. There is also the possibility of groundwater contamination. This diagram graphically explains the concept: 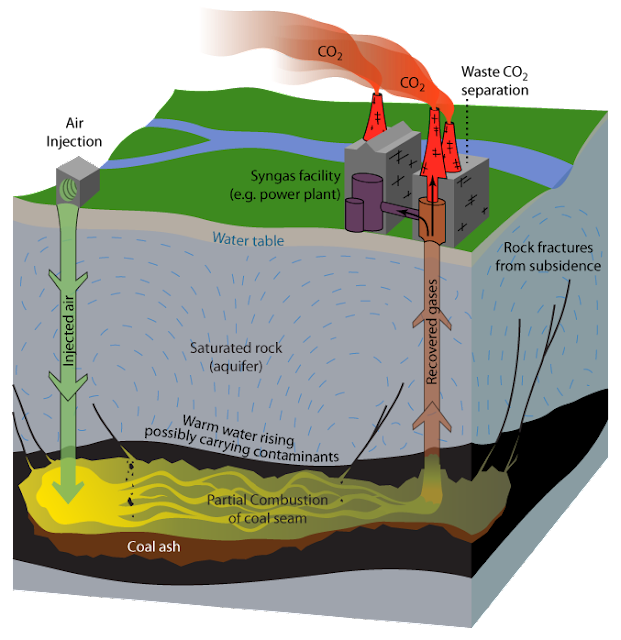 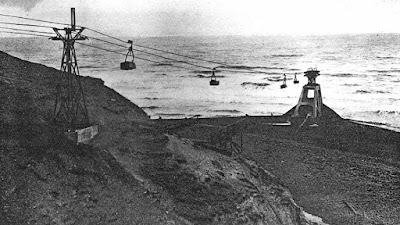 The Easington coastline is dominated by the coal industry, some of you may remember it in the film "Get Carter" where Michael Caine meets his end in a landscape seemingly drawn from the depths of Dante's imagination. The mine reaches out under the sea but the colliery waste is transported from the pit head to this beach. Deep seam mining is coming to an end in the UK, the industry turning to surface, strip mining production but even that is drawing to a close. Imported coal was promoted by the Thatcher government in the 1980's, partly as a means of completing the onslaught on the NUM (National Union of Mineworkers) but also because it was cheaper and better complied with the emergent environmental legislation which required coal containing lower sulphur.

With the closure of the pits a way of life was lost, the tight knit coal mining communities forced to look elsewhere for work and in some places complete villages being abandoned. The one positive, or so we thought, was that with the demise of coal the amount of pollution that we were pumping into the atmosphere would be significantly cut back and the scars on the landscape would be reclaimed or given back to nature; even the Northumberland coastline. We had not bargained for UCG.

But what of Derbyshire? There is a reference to UCG at Newton Spinney (where is that?) but this was an experiment carried out by the NCB in 1950. So there is a tenuous history of UCG in Derbyshire.  See this reference: NCB experiment in Derbyshire 1950. The potential has not gone unnoticed however as this link to the Frack Off website shows. Yes UCG is the evil cousin of fracking and we should be aware of the threat. We know that the Tory government is sympathetic to such exploitation and seemingly unheedful of the dangers. The possibility of UCG licenses being granted in the East Midlands is there with international companies such as Tesla (click on their UCG link) having an office in Alfreton.

The Frack Off website mentioned above is well worth exploring if only for their very informative maps. by writing this post there is no desire to be a scaremonger but as we have seen, assurances from Tory politicians that all is well in our county are usually devoid of substance. Who can forget the promise that no fracking would be allowed in national parks only to find out that licenses were being granted for fracking activity based outside NP's would be allowed to bore underneath them. There is no doubt that statements about UCG would be similarly untrustworthy.

As you can see from the accompanying map our region sits on sites designated for potential gasification as the East Midlands sits on some of the richest coal seams in the UK. The potential has not gone unnoticed as this Memorandum of the House of Commons shows. This was submitted by the Department of Energy and Climate change in 2012. It explains the principles behind the various methods of extracting gas from the earth but in this instance it is the accompanying map that is of interest (I'm sorry - yet another map). This shows the status of redundant coal mines, the depth of coal reserves even to the point of highlighting coal mines that could be expected to be suitable for UCG. What is most chilling is the reference to the "14th round of consultation" which the map reproduced below suggest covers what must equate to 60% of the country including all of the East Midlands. More recently Margaret Greenwood MP (Labour) has asked a very pertinent question in Parliament and you can read about it here on her blog: Margaret Greenwood blog. (you need to scan down a bit to find -

The energy secretary being of course our old friend Amber Rudd who was featured on this blog here: Tory energy strategy. A definitive list of UCG licenses granted or applied for in the UK appears to be very elusive but if there is a poor demented masochist reading this post who wants to find an activity somewhat akin to sticking pins in your eyes then reference to this government dataset could be useful: Llicence-area-dmt-v1.