Publication of Part 2 has been delayed because it seemed appropriate to spend some time thinking about the evening before posting inappropriate comments. from that you can deduce that BelperStuff was not happy with the panelist's responses. Ok so no surprises that I found the Tory to be objectionable, his patronising tone when addressing the audience and especially the rudeness he showed towards at least two questioners. His lack of openness was most apparent when he replied to a question:


What three things have you changed your mind about since the start of the EU Referendum debate?

Chris Heaton-Harris waffled on with more of the same stuff about the EU being inflexible and wasteful of money and that it was better if the UK divorced itself and took control of it's own affairs. This, however was in stark contrast to what he wrote in December 2014 on the Conservative Home website: You don’t have to change the treaties to change the EU. It is difficult to reconcile any of his 2014 view with his statements last Friday. Surely, voting to leave the EU thereby tearing up the treaty is the biggest change that could be envisaged. He mentioned none of this when answering the above question.

A slight aside: Of course this particular Tory has to work harder than most to be believed because there is ample evidence of him saying one thing but believing something entirely different: Tory MP running Corby campaign 'backed rival in anti-windfarm plot'. I imagine that there are many Tories who consider this chap to be on the"z" list so it is surprising that Pauline Latham asked him to be a panelist in Belper. Don't we deserve someone better?

Toby Perkins basically restated his case but did refer to the opportunities available to the UK if we remained in. Our imminent stint at the EU presidency offered possibilities for EU reform.

A further reason for hesitancy in posting Part 2

Some of you may have noticed that there is a slight bias towards the Labour Party on BelperStuff. OK, perhaps not so subtle. Unfortunately with this post I find something that Toby Perkins said to be distasteful. I mentioned it in Part 1, his apology for the "mistake" made by Labour in the mid noughties in not enforcing transitional quotas on Polish immigrants. This rankled because there is ample evidence that, because we have an affinity with the Polish people it was only right and proper that they were granted immediate right of entry.

Alan Johnson was on TV the other evening talking about this very point. He spoke of the then Labour cabinet being advised by civil servants that the likely immigration would be no more than 10,000 odd and as there were a significant number of vacancies in the UK at that time it seemed to be in the best interest of the country to allow unrestricted access. They were surprised at the numbers that did enter the country but, in hindsight, he still thinks that they made the correct decision. BelperStuff agrees.

We lived in different time in 2006, with certain industries desperately trying to recruit ......... an example being road haulage seemingly unable to fill 5,000 vacancies for drivers as well as many support staff posts remaining unfilled. The need for workers went right across the board but changing demographics with an aging worker profile meant that there were not enough young workers coming through to fill all these posts. Another problem area was railways, in some areas of the country the average age of train drivers being over 50. There was a serious problem which had not been helped by rail privatisation as there was much poaching of staff between franchisees and not enough training.

This chart drawn from ONS data that may illustrate this better: 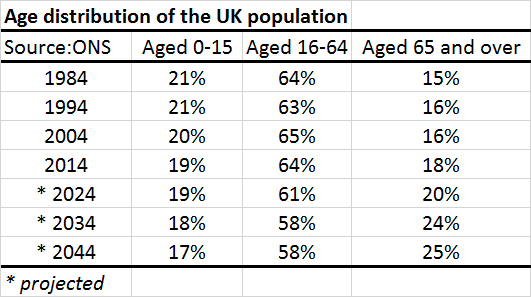 By 2014 the increased percentage of people aged over 64 was becoming apparent but the projected decrease in the numbers of working age is of greater concern. This demographic spread is unsustainable in the long term. Vote Leave campaigners never tackle this problem even though they must be aware of it.

Immigration helped to alleviate this crisis though we still have many age related problems to overcome. Toby Perkins disappointed in not fully understanding this. That there are dissatisfied unemployed workers in his constituency is not the fault of immigration. It is the effects of austerity on the economy, the lack of meaningful apprenticeships, the readiness of the current government to accept low wages as the norm. We face many challenges in our society but, as Alan Johnson said on TV, "those in the Labour and trade union movement should never blame those who are being exploited for that exploitation" (BelperStuff admits an element of paraphrasing).

The accompanying table, Causes of population change 2004-2014 helps to explain the situation further though more evidence would be required before those wishing to leave the EU were able to comprehend the complete picture. Unfortunately they are being fed incomplete and selective data, skewed to bolster anti-EU sentiment.

The ONS also supplies projections for life expectancy (the chart featured below) and this indicates that females will on average enjoy an extra 4 years of life by 2037 whilst males can look forward to an additional 5 years. The ratio of working age/retired will drastically change unless we make radical alterations to our society and the way we organise our economy. This should be the debate. We cannot go on judging our performance by growth in the UK GDP; we should instead rely more on such indicators as quality of life, sustainability and most importantly the eradication of inequality. We stand more chance on those measures if we remain in the EU rather than accepting the Leave campaigners model which they have just published: EU referendum: Vote Leave sets out post-Brexit plans. Hardly what you could call "fully costed" proposals but you get the idea in which direction they would be going ........ towards the right.