Ken Loach ......... Voting to leave the EU will result in governments moving to the right 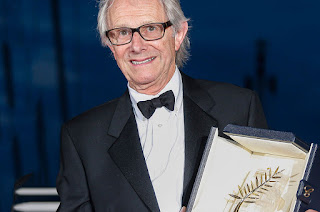 Ken Loach, the veteran left wing film director has done it again by winning the  Palme d'or, Cannes Film Festival 2016 with I, Daniel Blake. Ken had retired but felt the need to make yet another, a searing indictment of the dismantling of the welfare state. BelperStuff will resist the urge to comment but instead offer you links to the art and opinions of Ken himself. Below is a trailer for the film, suitably subtitled for its showing in Cannes. (link for those who cannot see the embedded video)


Ken is no stranger to critical acclaim as his output over six decades charts the lives of the disadvantaged and downtrodden, from homelessness and poverty in the 1960's to today, where an uncaring, quota led system declares those suffering from ill health to be fit for work. There is a wonderful archive of his work on YouTube:

When interviewed about I, Daniel Blake , Ken spoke about why he thinks the decision to leave the EU is a difficult one: (link for those who cannot see the embedded video)


"The problem is that if we leave (the EU) then what replaces it is a government much further to the right" Ken's view on the EU referendum 6 minutes into the interview.

Then at the press conference:
“On the one hand, the European Union is a neo-liberal project; it’s a drive towards privatisation and a drive towards de-regulation. The safeguards that are there for workers and for the environment are constantly under attack so it’s not doing us any favours at the moment. On the other hand, if we leave, we know the individual governments will be moving as far to the right as possible.”
Loach believes the solution is ultimately voting to stay and thinks we need to “make alliances with other European left movements”. Guardian article about Ken Loach at Cannes 2016

I could not resist this gem from the BBC, Desert Island Discs - Ken Loach - 1999 Ken talks about his life and art and the overwhelming impression is of a man driven to expose exploitation, constantly having to remind us of the consequences of political doctrine, the effect on people's lives. Now here in 2016 it does seem as if it is one step forward and two steps back. The gains of the post war consensus and the decision of the Tories to unravel those gains post 1979, followed by a degree of retrenchment by Gordon Brown following the Labour win in 1997 ............... all this has led to the post 2010 demonisation of the poor and disadvantaged. Ken has documented all the twists and turns, the hardships and despair ........... but also the joy of "The Spirit of '45" and the comedy of "Kes".