Results of yesterdays Belper AVBC elections ............. an analysis for nerds

Success in Belper but losses elsewhere means Tories increase their majority hold of the borough. Congratulations to Carol and Fay.

Both Labour candidates won their wards with Carol retaining Belper South whilst Fay wrested Belper East from the Tories. A good result for Belper Labour but not so successful elsewhere as we did not make any inroads in Duffield and lost 2 wards in Heanor and 1 in Ripley.

What the figures show is that a 6% increase in turnout favoured Labour and easily offset the fallout from the UKIP disintegration (if not fielding a candidate can be so described). Labour campaigned hard to win this ward and fielded an excellent candidate, backed by a dedicated team of supporters which netted a 52% increase in their vote. In contrast, the Tories relied upon their incumbent retaining the seat with the help of UKIP voters in search of someone to vote for which gave them a 29% increase over 2014. The strong LibDem increase of 141% is encouraging for them and evidence that they are emerging from the cloud cast over them from their alliance with the Tories at national level (or is it ...... see Belper South results).

With only a 1% increase in turnout Belper South should be an easier analytical proposition but the emergence of both Green and Independent candidates coupled with the towel being thrown in by UKIP  leaves this ward hard to read. Labour and Tories increased their vote by a similar percentage amount but Carol Angharad attracted an extra 182 votes (evidence of incredibly hard work and application) whilst Tim Sutton (who is presumed to be the next Belper mayor) could only manage an extra 148 votes. In 2014 it seemed that the UKIP vote was a decisive factor in Erik Johnsen winning for Labour, the theory being that UKIP took votes away from the Tories. The 2018 result does not support this analysis as Labour's showing suggests that many UKIP voters have moved to Labour. The significance of the 200 Independent and Green votes tends to confirm this.

The collapse of the Liberal vote in Belper South is at variance with their strong showing in Belper East which could or could not be reflection of strength of candidate and campaign. 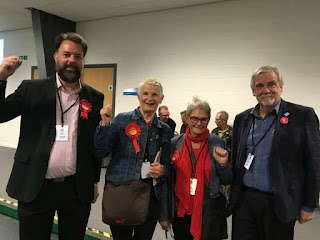 It should be noted that Labour now has 4 seats in Belper so has emerged as a strong force in the town's representation. In 2019 a further 4 Belper borough council seats (all Tory) will be up for election. The work never stops.

I would like to thank Erik Johnsen for his hard work over the past 4 years, not only for Belper South but for the help he gave to BelperStuff, supplying accurate feedback to ensure that this blog remained truthful. Well done Erik and good luck for the future.
Posted by It's ok to listen to the grey voice at 14:19