It slid through my letterbox like an invitation to believe in a parallel universe. The campaign leaflet from John Nelson MBE ended up on my desk for my consideration but I just could not get past the strapline, "your priorities are my priorities". Look I am not going to lampoon or make snide 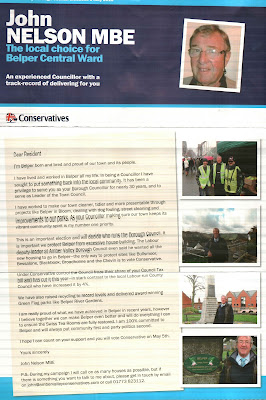 comments about a man's beliefs as Nelson is as entitled to his opinions as I am of mine. It is obvious that a socialist blog such as BelperStuff will find very little to agree with in a Tory party candidate's election address because, quite frankly we live on different planets; we view the world from opposite perspectives. However, what I do find worthy of comment is any degree of selectivity of facts ........... if you know what I mean ........... so I will briefly look at a couple of statements made by Nelson which do not not quite ring true.

Nelson states, "Under Conservative control the Council froze their share of your Council Tax bill and has cut it this year - in stark contrast to the local Labour-run County Council who have increased it by 4%.

Admittedly this is factually correct but the cut in the Amber Valley Borough Council element of my own council tax amounts to 34p in the year. Yes that's right, less than one penny a week. I am still considering how I will spend this windfall.

I am thinking of making a personal contribution, over and above what I pay in council tax by sending the council a cheque for 34 pence. I just don't need it.

It may surprise Clr Nelson to learn that the 4% increase in county tax was a concession made by George Osborne to local authorities who were being hit by austerity cuts in the grant from central government for the provision of  care of the elderly. So Clr Nelson, by his own admission is opposed to the policy of the Tory Chancellor of the Exchequer and would accept even deeper cuts to our elderly care facilities. Goodness knows what this would have meant for home care and services in support of vulnerable adults. Even with the 4% increase these services are under real threat.

See the quote from this leaflet:  Derbyshire County Council - Your Council Tax 2016/17

Social care charge. This year councils with the responsibility for adult care services were given permission by the Government to raise council tax by up to 2% in addition to the 2% maximum ordinarily permitted. Our council tax rise will be 3.99%. The extra 2% is specifically to help protect some adult social care related services. To find out more about what we are planning to use this money for please visit here.

To put all this in perspective for Clr Nelson the national funding gap for adult social care would reach £4.3 billion by 2020 without some form of positive intervention. This is but the tip of the austerity iceberg as our Derbyshire buses, police, fire ............... it goes on and on .............. services are all being squeezed. Although the easement by George Osborne allowing local authorities to increase council taxes to support these underfunded services gives the county the merest hint of a breathing space it does unfortunately represent a shift of taxation from central government to individual council tax payers. This lessens the tax burden from income tax and other government sources of revenue such as inheritance and capital gains, transferring the cost to those who are not so well off. If we look at the proportion of tax paid by council tax band in Amber Valley we find that nearly half of council tax in Amber Valley is due from band A and B households ........... these being the smaller homes which are usually rented, mortgaged or owned by those with smaller incomes. Moving the tax burden to councils directly impacts on the proportion that those on lower incomes have to pay ........ and lessens the tax take from the rich. The list below shows the current proportion of council taxes paid by each band, A being the smallest 1 and 2 bedroom apartments and terraced homes, through band C equating to the average size semi-detached with band H being the province of the very wealthiest. 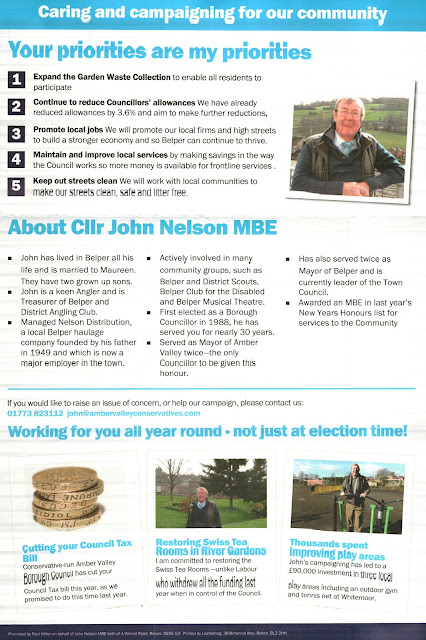 Ah yes Clr John Nelson MBE you can indeed say that the Tory AVBC have lived up to their promise to cut taxes and I thank you for my windfall of ............ a Tesco packet of ready to serve custard (well that's what my google search came up with when I asked what I could get for 34p). I have to be honest though, even when I try to make allowances for our different world view I struggle to comprehend how you can make the claim on the back of your leaflet:

Maintain and improve local services by making savings in the way the council works so more money is available for frontline services.

If the Tory government continues with the threatened further cuts to AVBC then we will have precious little left to argue over come 2020. AVBC net expenditure in 2010/11 was £16.34 million whereas in £2016/17 the budget provision is £10.7 million (underpinned by  a very large transfer of funds from reserves). There are rumours that by 2020 it will be down to near £7 million. I wonder what efficiency savings are planned to cope with this Clr Nelson.

As usual I make the offer to correct any factual inaccuracy there may be in this post. It takes a lot of digging to find out AVBC information, in contrast to Derbyshire County Council who maintain a website where all facts and figures are very easy to find.

BelperStuff will return to the parallel universe in the next couple of days with a look at what Nelson says about restoring the swiss tea rooms.
Posted by It's ok to listen to the grey voice at 16:24