BelperStuff has been quiet of late as other tasks and priorities have taken precedence (the astute amongst you will no doubt have detected this oft used euphemism for laziness). There is no lack of subjects to write about but, to be honest with you, sometimes the intellect slumps, the fighting spirit needs a rest. However here I sit on a quiet Sunday afternoon creating yet another blog post. I am motivated by an article ........ no it's dubbed a "feature" ........ in last week's Belper News.

I bought the paper to see if they had printed an article submitted to them to publicise the "Working together for the environment" meeting that is being held in No.28, The Market Place, Belper at 19:30 on the 6th April (next Wednesday) but unfortunately it failed to make last week's paper. You can however read the article here on the web based Belper Alternative News - Nailed: Labour environmental campaign offers new hope. The resultant poo - pooing of the article by the Green Party was regrettable but the the similarity to the People's Front of Judea sketch in Monty Python's Life of Brian film (couldn't resist it, here is the link: Monty Python Life of Brian Judean sketch) has lessened the sadness I felt at the criticism.

Opening up the Belper News in hope of seeing the submitted piece it was rather unpleasant to find this:

This item of journalism is rather strange in that the title would have you believe that the "green lobby" might not be against fracking after all (of course it's against it). The article itself makes the claim that, "in the interests of balance, we have spoken to INEOS Upstream -the company which has been granted the fracking licenses for our area". The operations director of INEOS is Tom Pickering and he says, "there is no risk free energy solutions but, if we don't find a solution, the lights really could go out. Coal is dirty, nuclear is expensive, importing gas means that we are dependent on getting supplies from some of the most unstable regions in the world, and renewables simply don't provide enough energy all of the time. We believe shale gas could play an important part in providing us with the energy that could power the nation into the future and help reduce CO2 emissions".

Tom Pickering goes on to claim that the anti-fracking lobby are clouding the debate by referencing images and disasters from the early days of fracking and ignoring the fact that the industry has moved on to, "demonstrate that the shale gas extraction can take place sympathetically and with no or minimal lasting impact to environments and landscapes". he went further to claim that, "a typical 10km square site would lead to around £375 million invested back into the area over the operation's lifetime".

To say that I am not convinced would be an understatement. There is just too much contemporary evidence that fracking is bad for both the local and planetary environment to counter Tom Pickering's claims. Before I get into that let's just remind ourselves what is involved with shale gas extraction:

I lifted that handy little .gif from this article: Inquiring-minds-Anthony-Ingraffea-science-fracking-methane. This was written in 2014 and details the body of scientific evidence that has emerged that shows the danger of fracking. The .gif relates to resultant earthquakes and you might like to cross reference with this January 2016 article in the Guardian. You might remember the earth tremors in Lancashire that were linked with fracking ......... there are many more examples.

Referring once again to the Inquiring minds article we find mentioned a recent scientific study of fugitive methane emissions  from both conventional gas wells and shale as sites. The Cornell University report is worth a look .............. especially page 5 which contains an easy to understand chart detailing how methane escapes into the atmosphere from gas wells. It's bad enough with conventional wells at up to 6% of all the gas produced over the lifetime of the site but with fracking this rises to up to 7.9%. This fact alone should stop our politicians from voting in favour of fracking right up until the industry can guarantee 0% fugitive methane emissions ........... which will be an impossibility. In researching or this post it became apparent that even the fracking industry itself has no idea just how much gas there is but make the claim that 10% of it is recoverable which is enough to power the UK, or at least the gas consuming element, for over 50 years. Now just imagine that for every 93 units of gas burnt we throw 7 units into the atmosphere, year after year, decade after decade, the scale of the environmental disaster and the acceleration to global warming posed by fracking becomes only too real. I am trying not to think about the harm being done by conventional gas mining !!!!

Danger to our water supply

The danger of fracking polluting our drinking water seems to be what excites the most passionate opposition to fracking. In the Belper News feature Tom Pickering accuses the green lobby of employing underhand and now outdated tactics in their campaign ............ so I will not disappoint him. This lady from Pennsylvania is holding up a jar full of tap water; water from her own household supply that has changed in both taste and colour since the commencement of fracking in her area (that landscape could almost be Derbyshire). Below is a rather nifty graphic that represents a slice through the earth. It simplifies fracking as it shows only one bore. (Does the industry now propose using one borehole for extraction of the gas and return of the contaminated water below ground)? The danger is readily apparent as fracturing and settling of the overlaying strata, not too mention the very real problem of borehole shaft fracturing which has beset the industry (but which they now claim has been resolved) has in many instances led to contamination of groundwater and the fresh water aquifers. 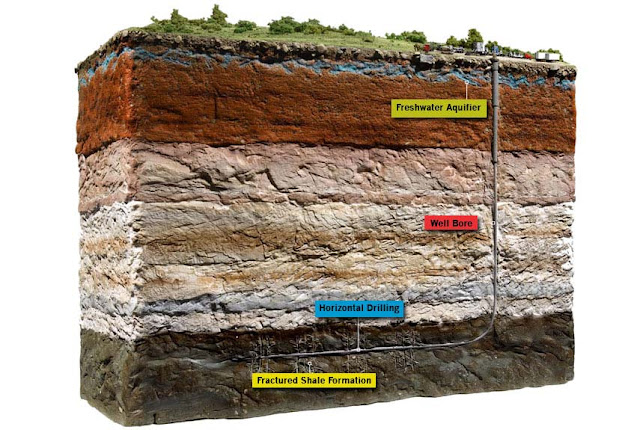 I am persuaded that fracking does carry with it the very real risk of polluting our water supply. I have read many horror stories but I could not shake off a small element of doubt that politicians would allow such risks to befall the people that they represent. I could believe such callousness of corporations ...........  but elected representatives ............. ? How naive of me. The evidence is there but the people we vote for have chosen to ignore it. Thankfully it is Labour Party policy to oppose fracking, it's the Tories that must be stopped. Labour are not alone as the SNP and the lone Green MP (amongst others) have voted against fracking. The battle goes on here, just as it does in the US. Even the US EPA (Environmental Protection Agency - so it's official) have doubts about fracking as evidenced by this EPA report on fracking and groundwater which is commented upon here Inside Climate News - 2015.

I think that's enough for one blog post. I was planning to comment on that infernal lie, repeated by Tom Pickering, that we cannot rely on sustainable sources for all our energy needs. That's just not true but I will leave that for another post ............. tomorrow.

In the meantime just let me once again remind you of the meeting sponsored by the Belper & Duffield Labour Party at which we will be launching the local branch of ........ well the flyer explains it: 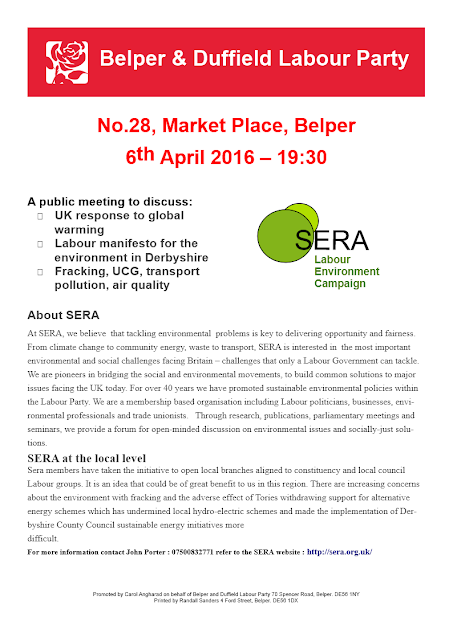 Don't forget that if you click on the environment link to the right in the list of topics you can find previous posts which include a series on the nuclear industry, underground coal gasification and emergent technology like microgrids.