Zero Carbon Britain ........... how to power Britain from sustainable sources of energy

In yesterday's blog post mention we looked at the Belper News feature where Tom Pickering of INEOS Upstream, the fracking company active in Derbyshire, made a series of unsubstantiated statements. The one that really took the biscuit was the claim that, and once again I quote,

"there is no risk free energy solutions but, if we don't find a solution, the lights really will go out ............. renewables simply don't provide enough energy all of the time".

Pickering claims that the fracking industry has matured and sorted out some of the earlier problems but he has not kept up with developments in the sustainable energy sector where exciting new advances have and are being made in storage and battery technology. This, coupled with an awareness that a significant impact can be made by reducing the energy needed to power the country by increasing the insulation and heat retention capability of our homes and buildings, the gradual switch to low energy devices and the use of smart technology to control consumption ........... this is apparently ignored by Pickering. I would be more disposed to his reasoning if he could produce authoritative academic evidence for fracking but try as I might the only pro-fracking sources would appear to be sponsored by the fossil fuel industry themselves ........... oh and of course politicians who are funded by the big energy companies. There is rather a lot of evidence to back up that statement both in the US and the UK.


The US presidential candidates have been heavily funded by energy companies (follow this link to an interesting website detailing US candidate funding) and here in the UK there is similar funding to the Tory party (Tory Party being fuelled by energy fatcats article in the Daily Mirror) and here (A Greenpeace article - Tory-donors-linked-unconventional-gas-industry) not forgetting of course this from the Guardian (Conservative links with the energy sector).

The only way to counteract this in the UK is to get rid of the Tories and return to the forward thinking policies of the Labour Party, perhaps via a common commitment by Labour, SNP, SDLP and Green MP's.

Can sustainable energy power the country?

This question is at the heart of the debate and doubts about this are wheeled out ad nauseum by proponents of fracking, UCG and the financiers backing the nuclear option. There are many more erudite than Tom Pickering who claim that sustainable energy alone will not be enough but none of them ever point to academic studies that prove their point .......... oh except for odd studies that they themselves have commissioned and wooly reports such as this, commissioned by the Department of Energy from a body named the Technology Strategy Board (Energy_Supply_-_Strategy_2012-2015.pdf) .................... what a load of guff. 2012 was the real turning point in the UK with legislation enacted by the Tories that started to erode the commitments brought in by the previous Labour government in accord with the 2002 Kyoto protocol. Now post the 2015 election the Tories are pushing further with their fossil agenda, able to escape claims that they are in breach of the commitment to achieve an 80% reduction in harmful emissions by 2050 because the effect of the now 8 year economic slowdown has of itself allowed us to reach the milestones that are enshrined in the 2008 Act. 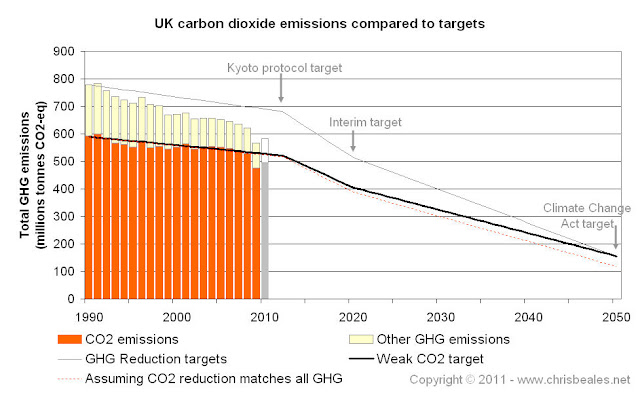 OK so still no proof that sustainable energy could power the UK!

Oh but there is ........ take a look at this video from the Centre for Alternative Technology (CAT):

Some of you may ask, well who is CAT and why do you believe them? My association with CAT goes way back to the early seventies. I was living in Brighton Kemptown and within my social set was a couple, a teacher and her husband, a bank manager. They sold up everything and moved to Wales to a remote cottage deep in the forest near a small town, Corris. A few months after their move a small group of us decided to visit them. I can remember our hosts pointing across the valley from their home, through a gap in the trees where you could see an old, worked out slate quarry, a black scar on the green hillside. The next day we went over there for a closer look and it was then that we first heard about the vision that was to become the Centre for Alternative Technology. Little did we know how important CAT would become. I have subsequently visited many times and been astonished at the transformation of that quarry. The research work undertaken by CAT is important and has fed into to the thinking of the green movement in many ways. CAT has developed an authoritative voice and the video embedded in this post can be believed.

CAT has gone further with an initiative promoting the idea that we should accelerate our decarbonizing program; zero carbon in 2 decades. See this video featuring CAT's Paul Allen:

Once again, a link for those who cannot see the embedded video

For further study I urge you to follow this link to CAT Zero carbon Britain website where you can download their research. They are advertising a course at the end of the month but you can visit the centre at any time and enjoy the unique atmosphere of hope that nestles in this beautiful Welsh valley. If Tom Pickering is reading this blog then I invite him to accompany a group of us to visit CAT at our expense.