In a parallel universe Pauline Latham has joined One Direction

A recent news item reported that Stephen Hawking, whilst taking a question and answer session in the Sydney Opera House, was asked by a young lady about Zayn Malik and the heartbreak caused by his leaving One Direction : link to NME article. He attempted to comfort the girl by suggesting that there is an alternate universe where Zayn has not left the band. I particularly liked his following remark:

'My advice to any heartbroken young girl is to pay close attention to the study of theoretical physics.'

By no stretch of the imagination could I be thought of as a heartbroken young girl but I was reminded of Stephen's advice this week when Pauline Latham's election leaflet popped through our letterbox. Reading through this missive I was asked to believe that all is right with the world and that Pauline had single handedly created a,"thriving local economy for all in Mid Derbyshire". At first I wondered what planet she was on but then, remembering Stephen, all became clear. Pauline lives in an alternative universe. If only I could spend umpteen years studying theoretical physics I would come to the comforting conclusion that there must be another parallel Mid Derbyshire where no one suffers from government cuts, where there is no poverty, no zero hour contracts, no waiting to see a doctor or sitting for hours in A&E, no shivering in a cold home in winter because you can't afford your bills ............... well the list is ..... unfortunately ....... endless.

Pauline's leaflet was exactly like her performance at the Duffield hustings on Monday night. She never said a word about austerity or where the axe wielded by George Osborne would fall if the
Tories are put back in for another 5 years. One gentleman asked where the Tories would find the money to fund their promised extra £8 billion for the NHS but she refused to answer and passed the microphone to the Green candidate.

It is just too easy for these Tories because, with the backing of the majority of national and local newspapers and a less than rigorous analysis of the effects of their policies on radio and TV they are never forced to explain themselves. It's only when the public are allowed to get to grips with them with searching questions that we have any hope of getting at the truth.

So, back to Pauline's leaflet. She is pictured in a variety of locations with the police, beside an ambulance and beside a newly built underground train as evidence of her involvement in local life but these images belie reality. I will give you some examples:

Police- 66% reduction in active police officers in Derbyshire: A few months ago I needed the assistance of a policeman in Belper so went to the police station .............. which is now closed but there is a phone on the wall so that you can call Ripley. Luckily there was a policeman actually in Belper and he soon joined me and sorted out my problem (don't worry, nothing criminal or life threatening). We got chatting and he told me that he was really off sick and not fit for active duty but because of staff shortages he had been asked to come in from his sickbed and cover Belper and the surrounding area. This man was definitely not fit and would have stood no chance if called upon to do anything that involved physical activity. We talked about the shrinking number of officers in Derbyshire and of the relentless drive to save money, mostly by reducing staff. This is reflected in the national statistics where the number of police officers fell in the four years after 2010 by 15,860. looking specifically at Derbyshire via Home Office documents held in the national archive I came up with the astonishing fact that the number of active police officers had declined in the county, from 2,110 in 2009 to 926 in 2014. By my reckoning that's a 66% decrease in the number of police available for duty. 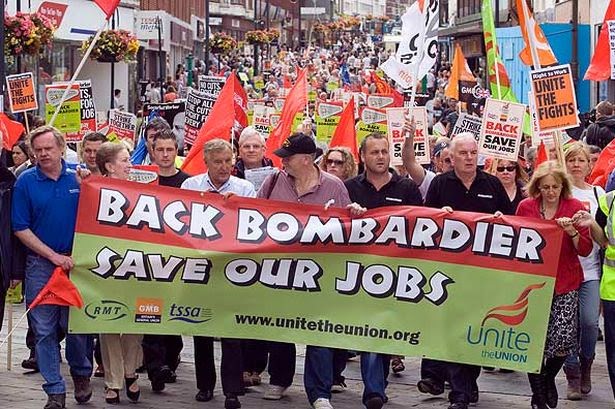 Bombardier : The most important task that was asked of Pauline and the other Derbyshire Tory
MP's in the last few years was to ensure that the contract to provide the new trains for the Thameslink project in London was awarded to Bombardier in Derby. Many thousands of jobs depended on it but what did they do? Gave the £1.6 billion contract to Siemens in Germany, a crass decision that meant that the UK tax payer was pumping money into the German company when it should have been coming to Derbyshire. (I know that Bombardier is owned by a Canadian company but the money would have been spent in Derby). The ConDem government, suitably shamed, placed subsequent orders with Bombardier, most notably the £1 billion Crossrail contract but nobody trusts the Tories to ensure that our manufacturers in the UK get the jobs because in 2012 the contract for new intercity trains with a value of £4.5 billion was awarded to the Japanese company Hitachi with assembly of the trains manufactured in Japan being undertaken in County Durham.

Jobs and zero hour contracts: In her leaflet Pauline states that 900 jobs have been created in Mid Derbyshire over the last five years. I am trying to track this data down for an in depth analysis but anecdotal evidence (which I usually use in support of statistics) will have to do for now. 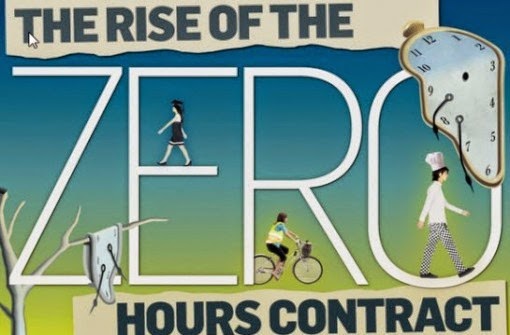 I was recently on a train and was asked if I would like to buy a cup of tea by a chap pushing a refreshment trolley. We started up a conversation and I asked him about his work. Yes, he had a zero hours contract and in a good week could get 24 hours work but some weeks it was far less. Of course he was paid the minimum wage. He and his partner both worked for the same company, pushing refreshment trolleys for minimal pay. Between them they earned just enough to live on and pay their rent but with no holidays or luxuries and were deemed wealthy enough to be denied any help with rent or given any council tax rebate. Unfortunately this chap's partner had been taken ill, needing an extensive period off work so they were down to just his income. They soon were in arrears with the rent and council tax. They asked for help from the benefits but were refused because they both had contracts of employment. He said they dreamt of being able to buy a house and start a family but knew it would remain a dream. This is a story that is being repeated up and down the country and obviously reflects the situation for many who live in Mid Derbyshire. Reading Pauline Latham's leaflet you would never know it.

So there it is, a politician completely divorced from real life, blithely sailing on under a blue sky when those around her are trying to find shelter from the storm. If Stephen Hawking's is right about these alternative universes then we must live in one where our Pauline has been miraculously switched with the Pauline from the universe with no cuts and no austerity.