I sometimes wonder how many people look at political polls and surveys. A whole industry has grown up around psephology (the statistical study of elections and trends in voting) but many suspect that the publication of these surveys in the lead up to an election can influence the eventual result. In principle I don't much care for them and there is an inevitable sense of pleasure when they predict the wrong result ............... as long as it is your chosen party that they failed to spot as the winner.

With the above as my caveat I have to own up to spending some time today looking at the polls. I was prompted by the subject of my last post, Russel Brand endorsing Labour and why this was of importance to Ed Miliband (why else would he have gone to see him?) I used a very interesting set of data supplied by the New Statesman:

........... and drill down into the data it certainly does. As I plumbed down into the depths, letting my inner geek take control, it very soon became obvious that, despite considerable variation between polling companies a general pattern emerged of voting intentions being affected by age. I thought about how to portray this in the blog and ended up putting the relevant data into a spreadsheet so that I could produce a graph (I was being serious about that inner geek). This is the result: 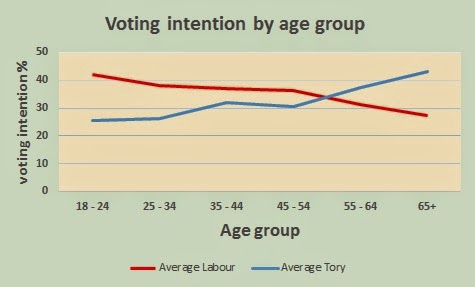 As you can see the older you get the more liable you are to vote Tory .............. but don't worry, it's not an inevitable fate, a good number of older folks never submit to the darkside ............ but there is still a problem because younger voters are choosing not to vote; election after election in ever increasing numbers as this chart produced by the London School of Economics shows (link to LSE if you want to know more):

................ but look at those over 45, they still vote as if their lives depended upon it. The result is that young people end up living in a world that is chosen for them by the old. That's why we get Tory governments, that's why tuition fees go up, that's why we have a housing shortage, that's why young families struggle to make ends meet. If the numbers of younger voters increased then politicians would have to listen to them and the policies they put forward would better reflect the ambitions of the young. I like to think that Labour strives to be fair to all age groups and looking at Labour pledges for this election that has not changed. Good. because if Labour did anything else then I would leave and ........ and ......... well I don't know what I'd do. The Tories are however more cynical and their policies and pledges reflect the aspirations of the 45+ group, on housing, pensions, bus passes etc. It's all about the haves and not enough about the havenots.

I am hoping that Russell Brand's call to vote will have a real impact on the political process. We can see what the young vote has done in Scotland with the rise of the SNP (note to self from inner geek - must dig out age profile of SNP supporters). I may not like nationalist politics but there is no doubt that by capturing the interest of the younger voters with policies camouflaged as progressive the SNP has radically changed the dynamic of voting north of the border (Russel would call it a paradigm). That said, I am heartened to see that the English nationalism of  UKIP flavour has not gained similar support ........ well how could it attract young voters with it's message of fear. The Tories are also playing the nationalist card but, being the nasty party it's hard to sell this vision to the young. UKIP and the Conservatives are cut from the same cloth, fear of the foreigner, now fear of the Scottish, fear of the EU, fear of the unions, fear of the deficit that great googly moogly (go on, try this link for a bit of light relief) and, above all, fear of the Labour Party. *

* If you want to see a politician without fear then I recommend this link to Ted Talk by Gordon Brown. He gave this talk in 2009 while still Prime Minister. No wonder the darkside loathed him.

May the force be with you on Thursday.
Posted by It's ok to listen to the grey voice at 20:08