My father was a printer. Demobbed out of the RAF at the end of WW2 he needed a job, a career. He found that job with a printing company, initially driving their delivery lorry but then gaining an apprenticeship, earning his papers in the early 1950's. The main benefit for my sister and me (aside from a loving family environment with a roof over our heads and dinner on the table) was a steady supply of proof copy books. Each week a new book, sometimes two. This was where my inner bookworm was born. Over the years I have literally (joke) read thousands of books, absorbed millions of words and been influenced by ideas from the witty and witless alike.

Literature takes on many roles in my life, from a relaxing way to spend the odd idle moment to a passion as I devour every scrap of work by a new to me author; some stories and characters stick in the mind whilst others, no sooner read are forgotten. Then there are times when reading becomes a solace, a balm for the mind when it is sorely bruised by the pain of personal loss or, as I have experienced these past couple of days, an emptiness of spirit as what I hold most dear has been rejected and ridiculed by the champions of inequality and privilege. I just had to get away from this misery so, employing the logic so eloquently stated by the Moody Blues over 40 years ago, "thinking is the best way to travel", (link to In Search of the Lost Chord) I switched off the computer and, beer in hand, tried to think of happy times. I thought of my childhood and it was not very long before I was trying to list the books that my father brought home, loosely stitched together, bereft of covers and most times with the pages still awaiting their final guillotine before the page edges all lined up. The list grew and grew until one particular book floated before my mind's eye ................ Ivanhoe. 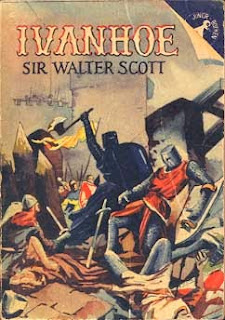 I knew immediately why I latched onto this classic because I can still feel the thrill I felt when first reading it, learning of the Saxons struggling against the ever more powerful yoke of the triumphant Normans and the stratification of the differing cultures that made up these islands. The Normans with an iron grip on the south though wary of an independently minded capital, the Saxons retreating to the north but gradually being assailed and dispossessed, to the west the Celts being further marginalised and ringed by the encircling Normans with only the far north defying the brutality of the conquerors. Yes it was obvious why I should dwell on Ivanhoe, not just as it also told of the scapegoating of the foreigner but because it provides a mental map of medieval Britain that is not so very far from the political map we woke up to on Friday. The parallel with Tories, Labour and Scottish Nationalists is uncanny when mapped, the colours of dominance and subjugation so obvious that you could be forgiven for thinking that the 900 years of intervening history were all for nought. Yes that is how I feel, that the rise from serfdom, the gradual accretion of rights for the individual, the freedom of education, the idea that care for even the most humble in this land was a principle that stood at the core of our society ................. all that has been devalued by the triumph of greed and an acceptance, an acceptance made easy by our system of choosing a government that can be manipulated to a point that people vote blindly, the acceptance of inequality. If only we had a constitution that enshrined our rights but this we do not have; instead we are governed by the rule of law and tradition but, as we know only to well, laws can be repealed or new ones created whilst tradition is subject to reinterpretation by the constant drip of misinformation, distorted by "newspeak" as forewarned by George Orwell's 1984.

With these thoughts in mind I fired up my computer to search for a suitable map so that I could better illustrate the regressive nature of the 2015 election and my search engine soon turned up this:

As you can see, the Vikings hold the Shetlands and Orkney Islands, the Scots are in full control of both highlands and lowlands, the Saxons hold out in the north as the Normans tighten their grip but there are also remnants of the industrious Saxons across the midlands and of course the tenacity of Welsh culture is still evident.

Looking at these maps I was reminded of some research that I undertook some years ago into the rise of global companies and their ability to avoid accountability as they move their legal seats to corporate havens. It was what Osborne introduced in 2011 that allowed these organisations to retain their HQ's in the UK as the new law gave immunity from taxation to companies that could thread all their earnings from UK enterprises through off-shore satellite companies. It was while researching this that I came across a shadowy organisation called the Expansionist Party. At the time it seemed something of a joke as surely such an overtly evil group would not be so open about their intention.

But this map, lifted from a page on their website that proposes a realignment of the UK looks uncannily like the what is proposed by the Tories, SNP and UKIP; in part already realised by the 2015 election. Some cry conspiracy at the drop of a hat and I am not normally one who reacts to hats hitting the ground but ..........
(If you want to read more about the Expansionist Party then click on this sentence). I couldn't resist lifting this gif off their homepage .......... it tells a chilling tale of US corporate ambition:

Look where thinking, the best way to travel gets you.