Is there a cure for Conservatism ?

This for me is a very basic question to ask on the eve of polling day. The obvious answer is that by voting against the Conservative candidate on your ballot paper we can ensure that our government, borough or town/parish council will be cleansed of conservative thinking but the question is more fundamental than that. In research carried out in the US:


............. in 2002, scientists at the University of California, Berkeley ............ , studied the "psychology of conservatism." According to a university press release, they found "the core" of conservatism is a "resistance to change and a tolerance for inequality."
If you want to read more about that then go to this article in the Chicago Tribune. I urge you to read this.

Conservatism in the UK is not much different with sufferers displaying extreme symptoms of intolerance by their demonisation of the poor, the disabled, the homeless and those in need of an egalitarian health care system. There is overwhelming evidence that proves that Conservative thinking damages our society but another trait of conservatism is displayed by Tories, (and now Liberals) they develop a blind spot for the truth. Who can forget Ian Duncan Smith claiming that although his own government department statistics proved that his policies were not working he knew he was right because ............. he just knew it. 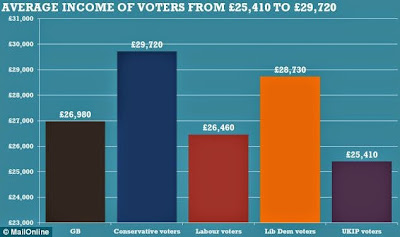 Another symptom of conservatism is the fear that someone might take their wealth away from them. Evidence of disparity of wealth is not hard to come by but the Populus polling company tried to categorise voters with a survey that produced this graph. It comes as no surprise that Tory and LibDem voters enjoy larger incomes than Labour voters. They are voting to protect what they have whilst Labour voters include many who can be counted as havenots and vote in the hope that society will change and undo the injustice that is exemplified by the widening gap between rich and poor. The graph comes from the Mailonline and they published it with some pride. Yet another symptom of conservatism, the innate aberration that allows them to effortlessly twist facts to suit their point of view without any sign of a conscience.

Worst of all though is the unjustified belief that private is better. It isn't. Report after report hammers home the fact that privatisation of services does not lead to an improvement. it just makes them more expensive and will ultimately lead to many being denied access to those services. Have you heard the word, "rationing" being used in relation to the NHS!!!!! Privatisation benefits the haves and does nothing for the havenots: 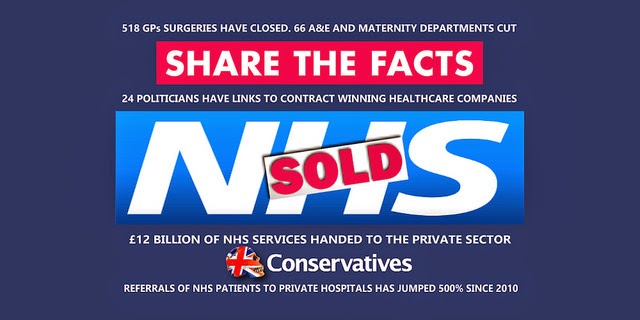 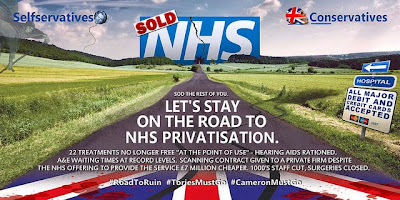 If conservatives, and that now includes LibDems who show a preference to continue in a coalition with the Tories, if they were honest their political posters would look more like this. I know where this leads because I have lived in places where there was no NHS and had to pay for private health insurance. BUPA quoted over £1000 per month for two of us. It is what the Tories want to introduce into the UK. They are going some way towards achieving this by back door privatisation of the NHS.

The man for whom no cure for conservatism could ever be conceived must be George Osborne. His budget speech this year was, from start to finish a demonstration of how conservatism can affect the brain. His claim that living standards are getting better for all is patently not true as he based that miscalculation by averaging the doubling of wealth at the top of the pile across the whole population. A report out yesterday by the PSE - The Poverty and Social Exclusion Unit - link shows that the chancellor must know that his living standards improvement claim is false. I will return to this in further posts.

So ............ is there a cure for conservatism? No. As long as there is rampant inequality there will be those who develop conservatism ......... some milder than others but as we have seen in the last post as wealth increases with age their is a greater threat of voting Conservative. There is no cure short of abolishing inequality and with the inbuilt bias of media, education (think Eton) and the rich holding a disproportionate amount of power, achieving equality is an extremely difficult task. There is however hope. Voting against the darkside will ensure that the shift of wealth and power to the haves would be slowed and eventually brought to a halt. Year by year we could then tackle inequalities (some things immediately like the bedroom tax and Tory NHS follies etc), effectively tipping the balance back in favour of those who are not rich. Only at the end of this process can we hope to find a cure for conservatism. Perhaps not a complete cure but at least we can strive to prevent the harm caused by this condition.