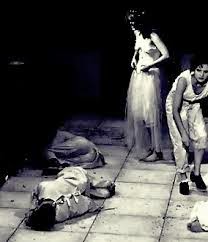 Isn't it strange how an image that lays deep and unremembered can suddenly surface, triggered by something that seems totally unrelated to that long lost memory. This happened to me as I proof read yesterday's blog post; the thought of those right wing voices repeating ad nauseam their mantra that Labour is responsible for all our economic woes. This unbidden memory has allowed the pieces to fall into place because now, when I think of Cameron or Osborne in my imagination I am seeing Ophelia from Shakespeare's Hamlet (no ..... don't stop reading). Ophelia is driven to madness because a lie that she told sets off a chain of events which culminate in her having to choose between the reality created by the lie, which has become the prevailing truth, or should she acknowledge the true reality that existed before the lie by at last telling the truth. The chaos in her mind sends her mad and some productions of the play hammer this point home by having her constrained in a straight jacket. Her soliloquy contains the words:

This is the dilemma (check spelling link) for Cameron and Osborne because they are trapped with this lie so must go on repeating it even though authoritative sources prove them to be wrong. They are in an even greater fix when it comes to justifying austerity because they have based the whole of their political and economic approach to governance upon a theory that has been totally discredited. Trapped in austerian straitjackets of their own making they now have no choice but to continue with the "long term economic plan"; the goal being, as Cameron freely admits, a state that is “leaner ... not just now, but permanently” (link to Cameron's speech in 2013). He thinks he knows what he is but inside he suspects that he may be something else.

I had intended writing exclusively about the absolute folly of austerity but you will be much better informed if you click on this link:

Make sure that you have some time for this, sit somewhere comfortable, a favourite drink to hand; shut the world out. After reading Krugman you too will see the likes of Cameron and Osborne as they really are, wrapped up in their madness, too witless to understand that admitting the truth will make them better politicians, better men, even if it comes at the expense of their jobs.

I discussed "the lie" with my wife this morning. My comment was that the left will always be at a disadvantage as it strives to be truthful, beaten by the forces of the right who have no trouble in employing a self serving distortion of the truth. Her reply was that it is always better to tell the truth. No ifs nor buts about that. Of course she is right but why oh why has Labour been silent whilst these lies have gained so much ground, why was our response not more robust? The answer must be that we too have our own straitjacket, our subconscious addled with doubts about past events and past decisions. The one bright hope is that at last we are finding the bravery within us to cast off our constraints, the recent display of strength by Ed Miliband shows that he is increasingly unfettered. We have other such voices in the Labour movement; I'm thinking particularly of Dennis Skinner, John Ashworth and Glenda Jackson, all unashamedly forthright. Another memory:

Glenda went on to star in parliamentary debates and who can forget her blistering attack on Thatcherism. No straight-jacket, no lies, no untruths just fearlessly telling it like it is. As my wife says, it's always better to tell the truth.