What about the Belper Town Council?

I have received a comment about the blog which took me to task, basically, "you call this blog BelperStuff so where is the stuff about Belper?". Fair comment ......... so this post concentrates on local issues and to that end I have been looking at some of the party political leaflets. Before I wade into them I thought it might be useful to have a look at the Belper Town Council performance under the Tories. It just so happens that I have been handed a copy of a basic numbers type of report that was produced by a local consultancy company using information supplied by the council for the years 2006 through to 2014. Apparently annual financial reports prior to 2006 are not available and as yet the 2014/15 report is still awaited. So here goes .... if the graphs seem a bit small then they expand if you click on them: 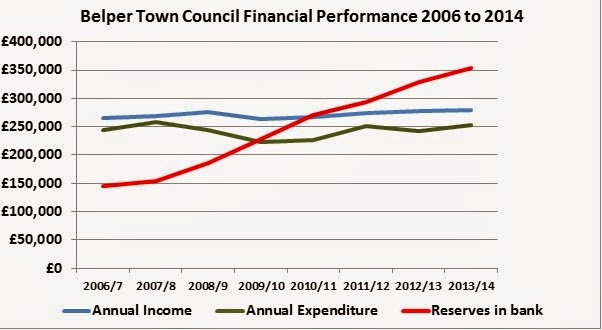 This should be self explanatory. We can see just how much emphasis was placed on increasing the reserves with an average being banked each year of £26,000 but there was a two year period after 2010 when significantly more was retained, our very own austerity in Belper.

Following this is an analysis of expenditure: 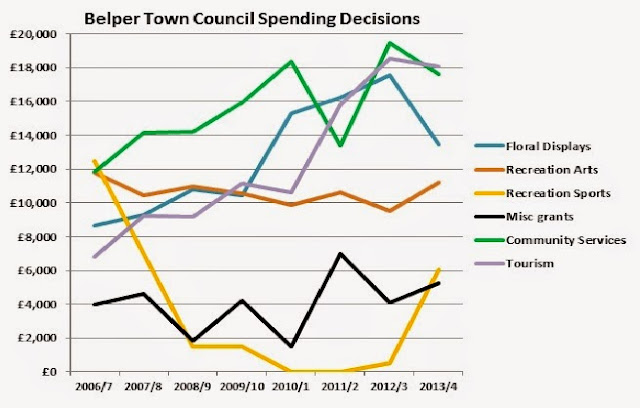 The accompanying notes to this graph make the following comments:

This is a selective graph, stripped of wages, salaries, admin, allotments, maintenance and vehicles to more clearly illustrate discretionary expenditures.

·       Overall expenditure has maintained a steady increase in line with income though has not kept pace with inflation.

·       Some variations in annual costs reflect capital expenditures such as new fences for allotments and a new chain for the Mayor.

·       A notable loser is grants to sports and this carries on a noticeable trend. Looking back at the Labour controlled council in 2001 the total granted to sports (including the Leisure Centre) was £37k. Compare this to 2010/11 through 2011/12, two years when grants to sports were £0 (zero).

Between April 2000 and April 2014 the following number of applications for miscellaneous grants was made:

The overall impression is that money was denied to sports and miscellaneous applications, allied with a gradual decline in wages and salaries (not keeping pace with inflation - my note) to provide increasing budgets to floral displays, community services such as the CAB, tourism (including the museum), the General Reserve and of course Christmas.

First UKIP. They are putting up a few candidates but I will concentrate on Dave Fisher as he has been a Belper Town Councillor for the past few years so presumably knows where the bodies are buried. I immediately notice that Fisher points out that the contentious housing plans were actually drawn up by the Tories when they were in control of Amber Valley Borough Council (AVBC). They made no mention of that in the meeting held in Strutts !!!! The rest of the leaflet seems reasonable and on the other side Fisher states that he is "disillusioned by the lies, broken promises, empty gesturing and illegal actions of some of the Tory members of AVBC". Strong words indeed. If I had that said about me in an election leaflet I would be taking court action so I presume Fisher must be very sure of his facts. What don't we know. Is there something we have not been told? Fisher goes on to say that he wants "a Council that represents you the voter and acts within the law at all times". He's really sticking the boot in to the Tories.

I start to lose sympathy for the UKIP candidates when I look at their bumf on national issues. I remember the claim they made that 10,000 houses were being built in the AVBC area to house immigrants when the truth is that, over the past 4 years we have seen an influx of just 200, many of them being Commonwealth citizens with an absolute right to be here. I also am very wary of their position on the EU.

Now Conservative. Their leaflet has a distinct floral feel to it as they place a high emphasis on blooms and gaining awards for blooms. They also make a show of starting up food festivals (now there I was thinking that was an idea originated by Fresh Basil ..... ), High Street Award and putting up Christmas lights. They do mention the housing issue but no mention that the original plan was drawn up by a Tory controlled council (as mentioned by Dave Fisher), "Your Conservative Council opposed this". I wonder what the truth of all this is. They then go on to say that, "Labour will increase your council tax and provide fewer services .........". Evidence needed on that I think. They go on, "The other parties have no track record of success and no plans for the future". We are back in Mandy Rice Davies territory here. How do they know that the other parties will do worse or put up taxes? They just say it, hoping that people will believe it. It really wouldn't be that difficult to improve on the last 12 Tory years in Belper.

What I do have real difficulty with is their statement that they will "Keep improving the services we provide for Belper, Milford and Makeney". Looking at the graph on expenditure it's tourism, flowers and an increase to the CAB that I detect with everything else remaining static or in fact decreasing because of inflation. Their performance on sport is dreadful as these Tory councillors, some of them sitting on both town and borough councils, have ensured that Belper is the only major town without a sports facility funded by AVBC. Why did they stop all funding to Belper? Why did they turn their backs on the modernisation of facilities at the Belper Leisure Centre? This is a question that should be asked of them, why did you deny funding to Belper?

Now Labour. I have taken a few minutes to think about what comments I will make here. On this blog I want my word to be trusted but as a confessed Labour supporter would it be possible for me to maintain that fairness. I think I've demonstrated this already for my fair comments on the UKIP leaflet even though I detest that party. So here goes:

The Town Council candidates leaflet is very positive, clearly stating their pledges and what each candidate believes in. I liked the advice given for new voters on how many votes they can cast (to be honest I learnt something myself). The pledges were about consultation with the public regarding the council reserves, toilets, dog mess, partnership with local businesses, support for local groups and a pledge to work with AVBC, "how best to develop the River Gardens' Tea House." I may have the ear of some of the local Labour people but I don't know what they intend to do on that last one. The candidates have interests in jitties, parents parking issues outside schools, playgrounds, litter, promotion of sports and arts groups, fuel poverty, alternative energy and working with the county council on plans for new old people's care facilities and library in Derwent Street. There is a distinct difference between the aspirations of the Labour candidates and the Tories.

Do I have any criticisms of Labour? I did wonder about Belper's floral splendor so I contacted one of the existing Labour Councillors who told me that the work of the paid council employees would not be changed in this regard and the partnership with local businesses would seek to maintain existing sponsorships of Belper in Bloom. I suspect that I have been somewhat easy on Labour but I did nail my colours to the mast so you can make your own judgement.

The Greens. I would have commented on the Greens but I have seen no leaflets. That is not a criticism.

I wish to thank the individual who supplied the council income and expenditure analysis and for permission to publish extracts on this blog.