We have had to listen to David Cameron telling the same lie for the past six or seven years. You know the one: the UK deficit was caused by the last Labour Government; sometimes varying it with the national debt is the result of Labour over-spending. It is so obviously a contrived lie but it has been repeated so often and by so many politicians, newspapers and endlessly on TV that, despite being a wicked distortion of the truth, it is widely believed to be the truth. Last Thursday, the Question Time election TV special was particularly uncomfortable viewing when an ignorant man in the audience accused Miliband of being a liar because everybody knew that all that debt was caused by Labour over-spending. I call this chap ignorant but can he really be blamed for believing the lie if he has read it over and over again in his chosen newspaper, hears it endlessly repeated by the Prime Minister and the chief Tory purveyor of falsehoods, George Osborne, both of whom are never challenged when the lie passes their lips.

I woke up this morning intent on writing about this but then, in one of those moments of coincidence that defy logic, several authoritative voices have spoken out on the subject and I have had some links sent to me by followers of BelperStuff (is it OK to refer to those who read my ramblings as followers). More of their input later. 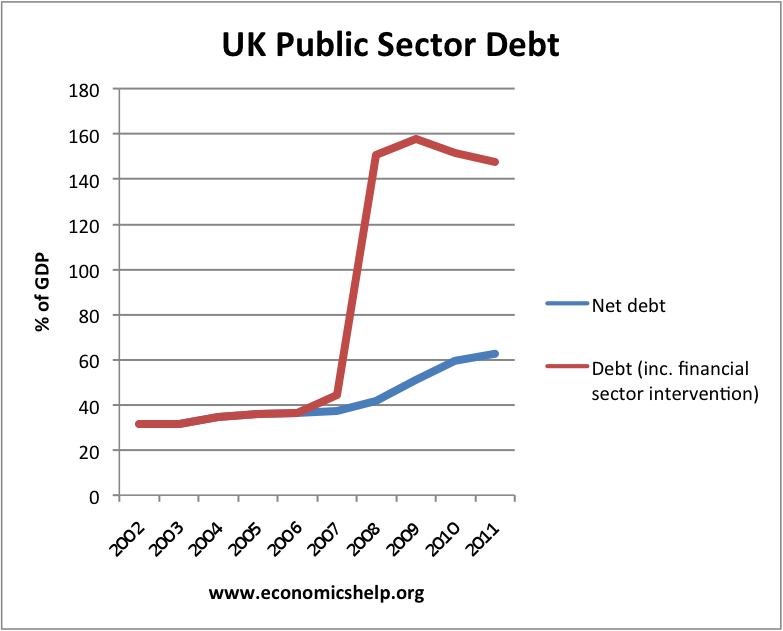 I've been digging away on the internet and one telling graph tells the tale for me, that the huge rise in borrowing in 2007/8 was caused by the rescue of our high street banks from bankruptcy; well I knew it anyway but it's good to have a graph to back me up (suitable apologies to those who worship at the feet of Russel Brand). Without this government intervention, inspired by the Bank of England and the UK treasury under Alistair Darling we would have faced a complete collapse of the banking system in which individuals would have lost all their savings, pensions would have been lost, house buyers would have no chance of getting a mortgage, companies would have closed in unprecedented numbers and many millions would have become unemployed. If you can remember the Northern Rock Bank collapse and the queues in the street desperately trying to withdraw their cash, then imagine that happening outside every bank in the UK you will have some understanding what that red line in the graph signifies; it is the amount of money that had to be pumped into the banking system to prevent a total collapse of our economy. Gordon Brown flew to the US and gained an agreement with that administration that they would also adopt the UK strategy and, within days, they too effectively took over their ailing banks. The UK response to the crisis was therefore responsible for pulling back the world from global economic collapse. The blue line in the graph is what our debt would have been if the government only had to increase borrowings as a result of the economic effects of the credit crunch, the rapid downturn in economic activity and the drastic reduction in tax revenues. It was the banks that caused the crisis but the people of this country that had to pick up the bill but if the Labour government had not stepped in the country would have ended up having to borrow a hell of a lot more.

David Cameron knew this at the time and praised the Labour policy, in fact voted for it. Newspapers knew it as did television pundits as far to the right as you care to go but, over time these manipulators of truth saw an advantage in twisting the facts to suit there political ambitions. Gradually the story was spun that it was Labour that caused the crash and Labour that had been careless with the governance of our economy. I watched with increasing disbelief as this fiction slowly became truth, gradually being accepted as fact to the point we reached on Thursday night where a man, his face twisted in hatred, railed against Miliband and called him a liar. What was so galling was that the audience were behind this chap, almost baying their approval of his ignorance ...... but they too have been fed the lie so cannot be too harshly judged for it is Cameron, Clegg and countless other individuals in their respective parties who decided to gain political advantage from this insight:

So we are where we are and my big question is why did the Labour Party not make strenuous efforts to nail this lie? Why did they sit po-faced on the Westminster front benches as this lie was hurled at them time after time as the Tories hooted their derision on Labour's embarrassment? Where were the voices of leading figures within the state apparatus that knew the truth but stood silent as those on the right worked diligently to distort historic fact?

That those who knew have finally decided to speak out, even at this late hour is welcome but I fear that this is too little too late because only a minority of voters will read this ( Guardian article link) or even notice that the former Bank of England governor Mervyn King said on Radio 4 last December (yet another Guardian article link) that Labour was not responsible for the crash. The truth is drowned out by the constant re-telling of the lie.

There are two other graphics that help to put this into context, the first sent to me today from a blog reader who found this on twitter:

and then a graph that I unearthed charting UK national debt from the year 1800 to 2010. This is the story that should have been told by Labour but, for whatever reason, was only quietly whispered thus allowing the lie to grow. 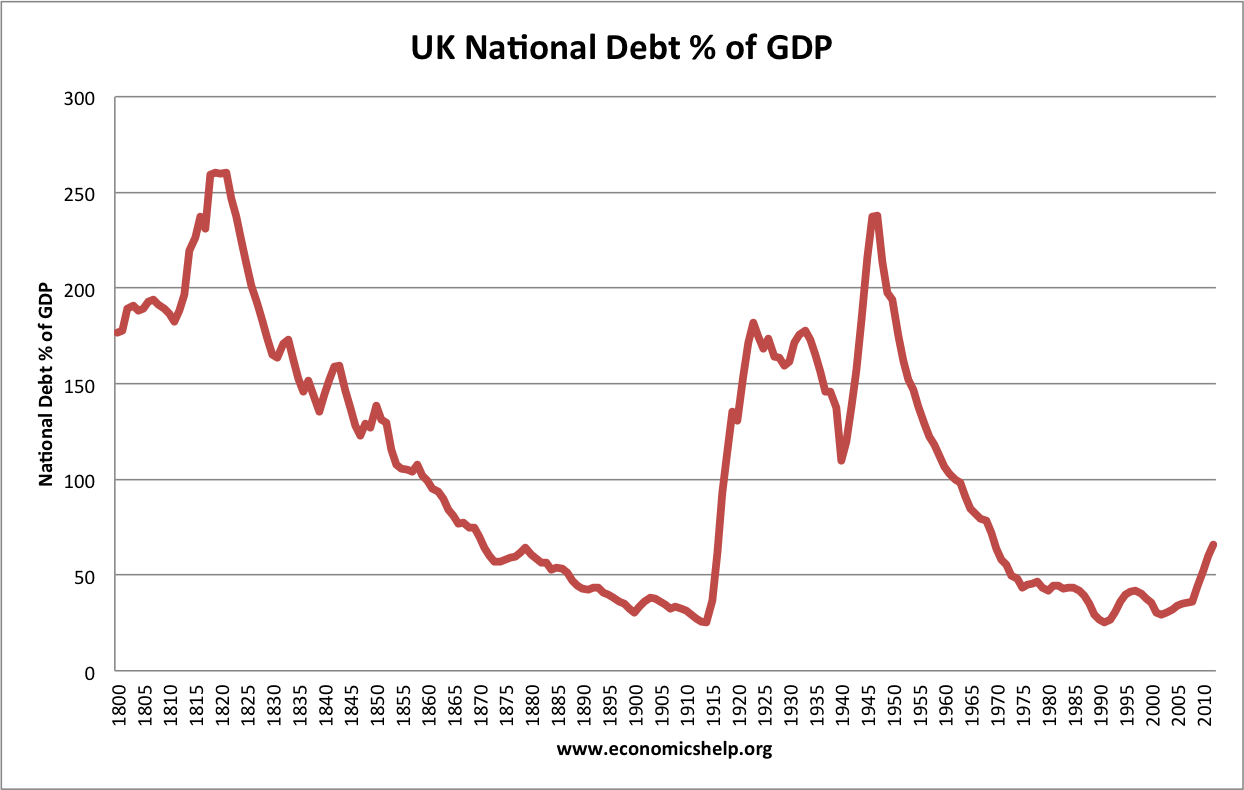